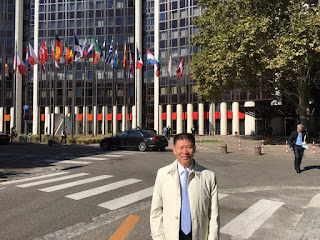 Editor’s note: The following is an executive summary of Christian persecution in China in 2015-2016 that was presented to the European Union Parliament.

(Strasbourg—Oct. 5, 2016) As China regresses into a more Maoist regime, the Communist Party continues to place restrictive measures on religious freedom and executes its control over all forms of dissent by arresting or otherwise harassing those who oppose the strictures.

According to current president Xi Jinping, religion must conform to and benefit a socialist society. At a national conference on religion held in April of this year, he urged his administration to ensure that religions “merge religious doctrines with Chinese culture, abide by Chinese laws and regulations, and devote themselves to China’s reform and opening up drive and socialist modernization in order to contribute to the realization of the Chinese dream of national rejuvenation,” and argued that the role of the Party was to “guide and educate the religious circle and their followers with the socialist core values….”

His words reinforced a pre-existing nationwide crackdown on religious institutions, including an ongoing cross demolition campaign, arbitrary arrests of pastors and lawyers, and the suppression of Tibetan Buddhists and Uyghur Muslims. Because China Aid receives reports on Christian persecution, this summary will spotlight their cases as examples indicative of a much wider repression of belief.

Persecution campaigns made 2016 one of the most tyrannical years since the Cultural Revolution. As imprisoned human rights lawyers still fight for the right to defend their clients without legal repercussions, officials in Zhejiang province carry out the third consecutive year of a beautification movement that targets church crosses for demolition, Henan province launched a movement focusing on forcing “illegal” Catholic and Protestant churches to conform to socialist ideals, and authorities arrested and detained church members.

Trials for lawyers rounded up in the 709 incident, the nationwide crackdown on human rights defenders named for the day it started, July 9, 2015, commenced on Aug. 2 with the sentencing of Zhai Yanmin, a rights activist who received a three-year suspended prison term for coordinating protests against government rule. A day later, a Tianjin court condemned Beijing church elder Hu Shigen to seven-and-a-half-years’ incarceration and five years’ deprivation of political rights for allegedly “subverting state power” by using Christianity to “spread subversive thoughts and ideas.” The tribunal presented photos of his baptism as evidence of his guilt, and Hu was forced to confess to his crimes, after which he accepted his sentence and did not appeal.

Hu, a Beijing University alumnus and former instructor at the Beijing Language Institute, formerly served 16 years of a 20 year prison sentence for founding an organization that opposed the Communist Party.

On Aug. 4, Zhou Shifeng was coerced into confessing to his crimes. Zhou, a Christian attorney, was arrested on suspicion of “subverting state power” on Jan. 8, 2016. In an attempt to publicly authenticate their charges against him, authorities pressured Zhang Kai, a human rights lawyer known for his defense of more than 100 churches affected by the cross demolition campaign, to travel from his home in Inner Mongolia, attend the trial and conduct an interview in which he denounced Zhou and the other imprisoned human rights lawyers. Zhang later recanted his statements, saying he had been too frightened to stand up to the authorities. Consequentially, officials barred him from social media and attempted to arrest him again.

On the night of Aug. 25, 2015, government personnel broke into a church in Wenzhou, Zhejiang and took Zhang and his two legal assistants into police custody. After holding him incommunicado for six months at an unofficial prison known as a “black jail,” China forced Zhang to confess on television on Feb. 25, 2016. A few days later, he was taken into criminal detention and released on bail on March 23. Since then, he has lived with his parents in Inner Mongolia.

Another Christian lawyer, Li Heping, vanished into police custody on July 10, 2015, followed by his brother, attorney Li Chunfu, on Aug. 1 of that year. Li Heping was formally arrested on Jan. 8, 2016, on suspicion of “subverting state power.” Since their disappearance, family members have not been able to contact either of the men.

The cross demolition movement, which began in 2014 as part of a beautification campaign known as “Three Rectifications and One Demolition,” continued in Zhejiang province during 2016. Although official rhetoric claims the operation intends to address “illegal structures,” it specifically discriminated against Christian churches and imposed strictures on the crosses that adorned the exterior of their buildings. In 2016, the number of crosses demolished surpassed 1,800.

In addition to previous restrictions on religious activity, Henan province published a work plan devising to bring “illegal” Catholic and Protestant churches in line with the Party’s ideologies. According to the official document, the authorities plan to manage church meetings and force the congregations to eradicate all religious symbols and become more socialist. The timeline outlined by the official document stated the plan was to be implemented on Sept. 4 and run until Oct. 15. The government mandated that the village and sub-district government branches investigate churches, submit reports to their superiors, assist the religious affairs bureau in distributing a notice about the expected changes to the churches, shut down non-compliant congregations, and record how satisfactorily they were able to complete the job as part of their year-end assessment.

Prompted by this decision, the Bo’Ai County Religious Affairs Bureau issued a notice to a house church. Claiming that the church was unauthorized, the bureau ordered it to immediately disband and remove any religious materials within three days. They urged the attendees to conduct religious activities at the local official churches, with which many of them have deep, theological disagreements. Failure to comply with these measures will result in further government interference.

This campaign echoes the new political trend set out in a proposed revision of the Regulations on Religious Affairs, which was introduced by the State Council earlier this month. The revision introduces tighter control on peaceful religious activities, such as punishing house church meetings by imprisoning Christians or heavily fining the church leaders, forbidding religious adherents from attending conferences or trainings abroad, and barring minors from receiving religious education. These measures violate China’s own Constitution, which guarantees religious liberty and condemns discriminating against religious and non-religious citizens and breaches the country’s pledges to adhere to the Universal Declaration of Human Rights, International Covenant on Civil and Political Rights, and the United Nations’ Convention on the Rights of the Child.

In 2015, a major developing case emerged as authorities increased pressure on Huoshi Church, the largest house church in Guiyang, Guizhou province. Though preluded by a police presence when the church moved into a new building in 2014 and the arrest of Zhang Xiuhong, an accountant and chairwoman at the church who was apprehended when she withdrew church funds at her beauty shop, the situation escalated when Pastor Su Tianfu received an administrative penalty notice on Oct. 21, 2015. Indicting himself, Zhang and a church member named Liang Xuewu for “changing usage plans” of the office space the church rents for its services and ordered them to stop holding religious activities there, despite the church continually reporting its services to the government. Originally, the building was approved for business operations. When they neglected to heed the orders, officials imposed a fine that accumulated 12,960 Yuan (U.S. $2,030) daily.

Su, who is currently released on bail, has been under constant surveillance since Dec. 19 and must use government-arranged transportation for all outings. He is expected to stand trial soon.

Additionally, administrative offices dispatched uniformed and plainclothes personnel to raid the church on several occasions. On Dec. 9, 2015, Pastor Li Guozhi, better known by his alias, Yang Hua, was taken into police custody and sentenced to two consecutive, five-day administrative detention terms a day later for the “crime of obstructing justice” and “gathering a crowd to disturb public order” after he attempted to prevent officials from confiscating a church hard drive. When his wife came to collect him on Dec. 20, she witnessed him donning a black hood and being herded into an unlicensed vehicle. Upon further inquiry, she learned that her husband had been charged with “illegally possessing state secrets” and was being transferred to another facility for criminal detention. She was not allowed to contact him. On Jan. 22, she received a notice announcing his formal arrest and changing his charge to “divulging state secrets.”

Even with his impending trial, which is expected to take place this month, authorities only permitted Yang to convene with his lawyers beginning in March. During one meeting, lawyer Chen Jiangang and his co-counsel, Zhao Yonglin, noted that he appeared fearful and began to suspect that he had been tortured. On their next visit, Zhao transcribed an interview with Yang in which he described how the prosecutor’s had stepped on his toes and threatened to kill him and harm his family in order to extract a confession from him. After hearing this, Chen and Zhao filed a lawsuit against the prosecution team and asked that they be criminally punished for “using torture to extort a confession.”

In the highest profile case of Christian persecution since the Cultural Revolution, China ousted Gu Yuese, chairman of the Hangzhou branch of the China Christian Council, from his position as the head pastor of China’s largest Three-Self Church on January 18. Later that month, Gu was arrested on a falsified “embezzling 10 million Yuan (U.S. $1.6 million) in funds,” although many Christians believe authorities incarcerated him for his opposition to the cross demolition campaign. On April 1, he was released and placed under “residential surveillance.” His case demonstrates the rampant spread of religious persecution as China clamps down on both house and state-run churches.

In conclusion, China continuously violates its own laws and international statutes safeguarding religious freedom in favor of promoting a socialist agenda, forcing religious devotees to choose between certain persecution and disregarding their deeply-held beliefs. Additionally, it prosecutes lawyers who attempt to defend the rights of religious practitioners, completely disregarding the rule of law. International governments must persuade China to free those it unjustly holds behind bars.