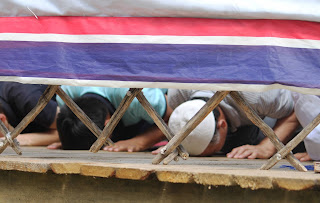 Chinese airports on alert for Muslims

(Shenzhen, Guangdong—July 13, 2018) Airport staff across China have been singling out and interrogating ethnic minority Muslims for months as part of a crackdown on their religion, ChinaAid recently learned.

If, after checking their passports, airport security discovers that a person is a Hui, Kazakh, or Uyghur Muslim from Xinjiang, they take them to a room and videotape an interrogation. An anonymous Kazakhstan citizen described his experience, saying, “I was traveling from Seoul to Shenzhen. The border inspector brought me to a room after checking my Kazakhstan passport and discovering that I was born in Xinjiang. He asked me when I immigrated to Kazakhstan and what relatives I have in Xinjiang and their names. The inspection was detailed. The inspectors then notified the police in (the Ili Kazakh Autonomous Region, an area in Xinjiang) to verify my identity.”

Police then brought him to another cell with surveillance and let the Ili Kazakh Autonomous Region police question him. “They asked me to introduce my family members and inquired why I immigrated to Kazakhstan, whether my house in Kazakhstan was purchased or rented, what I intended to do in China, how much money I had, and what kind of products I planned to purchase. I told them that I am a Kazakhstan citizen, and I didn’t violate any laws. I said, ‘You shouldn’t treat me like this,’ but they ignored my complaint.”

He also revealed, “One of my friends arrived in Hong Kong from Almaty in January. He was denied entry. The border inspectors claimed that he didn’t have enough money to stay in Hong Kong and demanded proof of his deposit from the bank.”

Another Kazakhstan citizen named Amanjiang told ChinaAid that police at the Beijing Capital International Airport interrogated him for seven hours and demanded to escort him to Xinjiang. “I refused. I said that I could travel alone. I could purchase my own ticket. I bought a ticket after they consented, and they left after following me to the boarding gate. I got away and went to the Kazakhstan Embassy. I told them that I might be arrested if I went back (to the airport), and they said it was unlikely. I then took a taxi to the airport and bought another ticket to Almaty.”

After he returned to the airport, Amanjiang called his sister via the Chinese social media platform WeChat and learned alarming news. “The police were at my sister’s house, and they were trying to find out where I was. They wanted me to cancel my residential registration in Tacheng (Xinjiang) and claimed that it would only take two days. They threatened to arrest my sister if I didn’t go back. They also called my house in Kazakhstan. My wife was terrified.”

Feeling he had no recourse, Amanjiang told the police his whereabouts. Moments later, a handful of police handcuffed him and took him away. “They asked me to buy another two flight tickets, which cost me about a $1,000 (USD). I hadn’t slept for two days at that time. I rested on a chair, accompanied by two guards at the airport, waiting for the flight to Xinjiang.”

Once he arrived in Xinjiang, authorities took Amanjiang to a detention center in Tacheng. The police subjected him to more interrogations for another five days before transferring him to a “political training center,” one of a propaganda.

“16 people shared a 20 square meter room,” he said. “Everyday at 6 a.m., we got up to sing the national anthem. They gave us a steamed bun and asked us to read materials on eliminating extreme religions. More than 100 sections were on religion. We kept studying after lunch, and we received military training at night. We marched on spot. They put handcuffs and shackles on me. I was in the training center for two months.”

Over the past few years, the Xinjiang government has concentrated on eliminating Muslim ideology, labeling even peaceful adherence to the religion as “extreme.” This resulted in the mass, ongoing arrests of ethnic minorities in Xinjiang, who are traditionally Muslim, for non-infractions, such as posting Quran verses online.

The building where Amanjiang was locked up has four stories and contains about 50 cells. Since 16 people share a cell, it is designed to accommodate about 800 people. Amanjiang said 95 percent of the prisoners were Kazakh, Uyghur, or Hui, and that the guards did not beat him because of his Kazakhstan citizenship. Many others imprisoned in “political training centers” have reported beatings and being forced to hold torturous positions for a long period of time.

Amanjiang was released on April 12 after Kazakhstan’s Ministry of Foreign Affairs intervened.

ChinaAid exposes abuses, such as those suffered by China’s ethnic minorities, in order to stand against abuses and promote religious freedom, human rights, and rule of law.