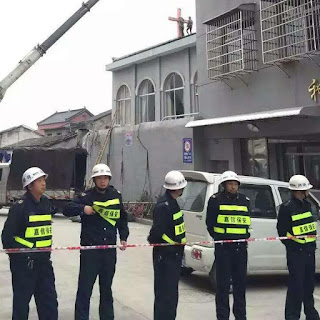 The announcement came when the city’s ethnic and religious affairs bureau issued the “Rewarding Measures for the Public Reporting Unlawful Religious Activities in Guangzhou” on Wednesday of last week, which stated individuals who report alleged “illegal religious activities” could be awarded up to 10,000 yuan [$1,500.00 USD]. People who wish to do so may phone the police, call China’s government-run hotline, make reports online or via the social media platform WeChat, or write letters.

Guangzhou’s ethnic and religious affairs bureau purported that the purpose of the “Rewarding Measures” is to prevent and eliminate illegal religious activities, including religious promotional materials, the support or financing religious extremism, the promotion of national division, terrorist activities, the undermining of national unity, and the endangerment of national security. However, China often arbitrarily applies these terms to individuals who practice their faith peacefully, such as pastors or Muslims who wear clothing that expresses their religious affiliation.

In fact, a Christian surnamed Li told ChinaAid, “[The government’s] suppression of churches is getting stronger and stronger. Now, we do not dare to hold public activities. Some people were taken to the police station for questioning simply because they were distributing Gospel leaflets in public, so we have stopped distributing the Gospel leaflets. The community officials are also very alert about gatherings. They ask the residents to keep their eyes on Christians and to report any Christian gathering as soon as possible, and they will be rewarded.”

Such actions come in the wake of China’s attempts to crack down on religious institutions that do not align with the agenda of the Communist Party, a process known as “Sinicization.” Since the Chinese government believes foreign nations use religion as a means by which to undermine its authority, it views faith and those who partake in it as a threat to its power, specifically if people from other countries are involved. Because of this, China routinely shutters religious institutions and imprisons or otherwise suppresses those who take part in religious beliefs, despite enshrining religious freedom as a guaranteed right under Article 36 of the Constitution of the People’s Republic of China and signing international documents obliging it to respect religious freedom as a fundamental human right.