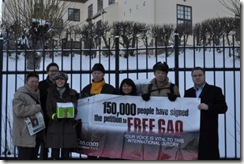 Below is an account of what happened at three Chinese embassies and one consulate on Dec. 10, 2010, with accompanying photos and video.

The Hague, Netherlands
Willem Amendt of the Boeddhadharma Foundation joined dozens of demonstrators outside the Chinese Embassy at The Hague who were protesting China’s policies in Tibet, its treatment of Uyghurs in Xinjiang, and the imprisonment of several dissidents and religious figures, including the Panchen Lama and Nobel Peace laureate Liu Xiaobo. At the end of the protest, Amendt and several protest leaders went up to the embassy’s front gate to request that the Chinese ambassador receive two petitions, one for Gao and the other on the Tibet issue. When no one was forthcoming from the embassy, Amendt could only stuff the pages of the 2,600-page petition into the embassy’s letterbox (3:55 – 4:18 in the video).

See the video of the protest and petition delivery at http://www.youtube.com/watch?v=7Fv1bBkKNIc

Jones explained that they were there to deliver a petition and the policeman replied saying, “I’m aware of that, and I’m afraid it won’t be possible to deliver it.”

Jones asked if he could slide the letter with the CD under the door and was refused. Jones then requested that he be allowed to take a photo of the attempted delivery but the policeman again refused, telling him he would have to cross to the other side of the street to take a photograph.

The London participants of this worldwide petition-delivery expressed shock that a policeman, paid by the British taxpayer, was being used to prevent the delivery of the petition to the Chinese embassy and said they planned to complain to the Metropolitan Police.

San Francisco, CA, USA
John and Nancy Murphy, who were acting in their capacity as private citizens, fared better than the others at the Chinese consulate in San Francisco, where they were able to actually speak to someone in person and gained entry—briefly—into the mission.

When they rang the bell at the front door, a female staff member at the embassy answered and asked what they wanted. They responded that they had a delivery from ChinaAid and were allowed inside, where they spoke with the woman in person.

When they handed her the envelope containing the CD of signatures, she appeared to have no knowledge of who Gao is, even though John pointed out that the Chinese embassy website had information on him. She then told the Murphy that they should take the envelope to another building and asked them to wait outside while she called someone.

The Murphys resisted a little, fearing that once they left the premises they would not be allowed back in, but she persisted. Finally, after John asked if they could trust her to let them back in and she said, “Yes, ” the couple politely stepped outside.

They waited fruitlessly for 10 minutes, then rang the bell again, only to be told that no one was available to see to their request. They placed the envelope in the mail slot and left the premises. 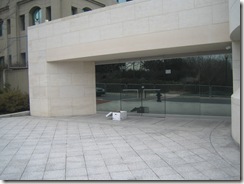 
This box containing 2,600 pages of a petition with 150,000 signatures calling for the release of Christian human rights lawyer Gao Zhisheng is a poignant illustration of the Chinese government’s attitude toward international criticism of its human rights record. The box was left outside the Chinese embassy in Washington, DC after embassy staff refused to come out to take delivery of the petition.

In the U.S. capital, things were not much different. Tara Plohocki, also acting in her capacity as a private citizen, and four others arrived at the Chinese embassy where they were told that they would not be allowed to hand the petition to anyone in the building. So they simply left the box filled with the 2,600 pages of 150,000 signatures at the embassy door.