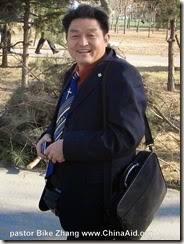 (Jiaxing, Zhejiang—June 9, 2014) Last week, authorities in coastal Zhejiang continued their persecution of Christians through run-ins with the president of the Chinese House Church Alliance, whose gatherings they interrupted three times within a week.

On Tuesday evening, Pastor Zhang “Bike” Mingxuan, president of the Chinese House Church Alliance, who is known for traveling via bicycle, hence his nickname, was delivering a sermon at a house church in Xiuzhou District, Jiaxing, when SWAT officers entered the building while a vehicle full of backup waited outside the church.

“They caught both of us,” Zhang said, referring to Pastor Lu Jingxiang, the church’s pastor and Zhang’s host. “[The officers] told me to come down from the pulpit. I asked them to show us their legal papers. They said our [gathering] was illegal. I said our gathering is not illegal, and that the police’s action was illegal.”

“[An officer] said that Christians should register. The people from the public security bureau and the religious affairs bureau took me away,” Zhang said. “Again, they did it without any legal papers. They took me to the… Yizhuang Neighborhood Office where I stayed for 3-1/2 hours.”

“They questioned me and Pastor Zhang separately, and they asked why we came,” Lu said. “They also said that…we should go and gather at a TSPM church. I said ours is a house church and it’s not an illegal assembly. Later, they asked me to sign a written record. I didn’t. Pastor Zhang’s draft for his sermon was confiscated.”

Zhang told China Aid that he demanded that police issue a list of seized items after his speaking materials were confiscated. “They took away the map…I used in my sermon. He said there was a seal of the Chinese House Church Alliance. I told him that he must go through the legal procedure. He wouldn’t give me a list of seized items.”

“Later, he gave me a white slip. I said the white slip doesn’t count for anything. Then he said he would give me the seal of the Neighborhood Office. I said I need the seal of the police station or the religious affairs bureau. At 10:10 a.m. on June 4, a police officer named Tao gave me the list of seized items with a seal.”

Zhang said that more than 10 SWAT officers broke up the gathering of more than 30 believers.

Thursday
Only two days after officers dispersed believers in Xiuzhou District, Zhang planned to deliver another sermon in Tongxiang, another county-level division of Jianxing, where officials again harassed him.

“At Panshi Church…more than 20 people were baptized,” Zhang said. “Five people from the public security bureau and the religious affairs bureau went there. They saw us baptized and took photos of us. After that, we held our gathering, and they watched us.”

After the gathering was over, the officials approached the group and told them to take down the lit sign in front of the church. “They wanted to dismantle the light box outside Panshi Church. I said no because this is a Christian sign. The officials said the light box affects the beauty of the city. I said every store in the streets has a sign. Then, they didn’t say much and went away,” Zhang said.

FridayAuthorities continued to persecute Zhang the following day. “Zhang Mingxuan is still in the home of Brother Yu in Tongxiang, Zhejiang,” said Liu Fenggang, a Beijing pastor visiting Zhejiang’s neighboring Anhui province, on Friday. “This morning, Brother Yu and his wife took him to Jiashan to preach. All along the way, police were following him.

“When he arrived at the gathering site in Jiashan and had just begun to deliver a sermon, many police officers broke in and took [Zhang and other believers] away. Just now, a brother in Jiashan called me and told me to appeal to the public,” Liu said.

“As we were eating lunch at 11:30 in the home of a sister in Jiashan, people from the public security bureau and religious affairs bureau went there and took us to Weitang Neighborhood Office,” Zhang said. “Some other co-workers were also taken away.”

The believers have since been released.