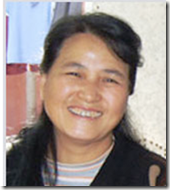 By BosNewsLife Asia Service   May 27, 2011 (4:53 pm)
BEIJING, CHINA (BosNewsLife)– One of 10 Chinese house church Christians sentenced to jail and a labor camp in China’s Shanxi province was free on medical parole Friday,  May 27,  as she nearly died after more than a year in detention, her supporters said.
(Photo: Yang Caizhen has been released for medical reasons, her friends say.)
Yang Caizhen, whose husband was one of the senior leaders of the Linfen Church network, was transferred in February from a prison hospital “to a local hospital where test results showed her to be in seriously declining health,” said rights group China Aid Association (CAA).
“Due to the high cost of long-term hospitalization at the prison’s expense, the prison director decided to release her into her family’s care at their own expense,” added CAA, which is in close contact with the Christians.
“Ms. Yang is now at home, being cared for by her mother, brother and sister-in-law,” the group explained.

OTHERS DETAINED
Nine other house church Christians detained with her in late 2009 remain behind bars on charges linked to their Christian activities outside the official, government backed, denominations.
Yang, a former medical doctor, was sentenced to “an extra-judicial two-year re-education-through-labor term” which she was reportedly serving at the Shanxi Women’s Prison in the capital city of Taiyuan.
She is the wife of Yang Xuan, who has served as a pastor for the churches in the city of Linfen since 1994, shortly after the churches split from the government’s Three-Self Patriotic Movement.
“Yang Caizhen’s health problems no doubt were related to the heavy work demands imposed on her by the labor camp,” CAA added. “She was forced to work every day from 6 a.m. until 10 or 11 p.m., for which she received the equivalent of $20 per month, with 77 cents for medical care and $1.38 for pocket money.”
Chinese officials have not commented on the case.
HIGH FEVER
CAA said Yang began to feel ill in February, when she had “a high fever and complained of pain throughout her body.”
Although the prison clinic reportedly gave antibiotics, the fever only briefly disappeared. Eventually, “She was transferred to an outside hospital, where a chest x-ray and test results from routine blood work showed her to be in poor health, including a high fever and liver inflammation. Treatment would require long-term hospitalization,” CAA told BosNewsLife in a statement.
The group says that when she was released into her brother’s care three days later, “Yang was barely able to speak.” After paying her hospital bill, “which the prison did not pay”, her brother transferred Yang to a hospital in Xi’an, nine hours’ drive away. “When they arrived, doctors there said her condition was so serious that any further delay in treatment might have resulted in her death.”
Yang remained hospitalized for more than two weeks before going home.
PRISONERS TREATMENT
Her case has underscored United Nations and human rights groups concerns over the treatment of prisoners in the Communist-run nation. The government has in most cases denied wrongdoing.
It also says Christians are free to worship within the country’s state-run church system.
However many of China’s Christians prefer to worship within underground ‘house churches’, named this way as they are often held in homes of believers or other alternative accommodations.
Officials within the Communist Party of China have been quoted as saying there may be as many as 130-million Christians in the country, one of the fastest growing Christian communities in the world. (With reporting by BosNewsLife’s Stefan J. Bos).
Copyright 2008 BosNewsLife. All rights reserved. This material may only be published, broadcast, rewritten, or redistributed by those sponsoring BosNewsLife for $10/month and/or with our prior written consent.
http://www.bosnewslife.com/16982-chinese-house-church-christian-released-after-nearly-dying