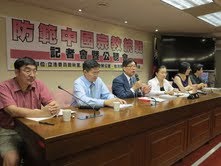 Guo spoke about the persecution of house churches in mainland China and the infiltration by the Three-Self Patriotic Movement (TSPM), a commission which regulates religion and is run by the Chinese communist government. The Taiwanese government agencies Guo spoke to include the Taiwan National Immigration Agency, Mainland Affairs Council, National Security Bureau, Ministry of Foreign Affairs, and the Ministry of the Interior, etc.

At the hearing, Tian noted that the national security of Taiwan is threatened by the Chinese communist government and that Taiwan is likely to become the second Hong Kong. Tian elaborated, saying she expects that the Chinese government will send secret agents into Taiwan under various covers before it fully takes over Taiwan.

Tian said that even before signing the Cross-Straits Agreement on Trade in Services, which opens trade between Taiwan and mainland China in 11 service areas, a large number of Chinese secret agents disguised as religious figures began to infiltrate house churches in Taiwan and bribe anyone with important information. Tian added that Taiwan has been flooded with secret agents since the agreement was signed in June.

Yang noted that the Chinese communist government applies the strategy of “fake trade in services” and “fake religion and a true United Work front” to Taiwan while the Taiwanese government is completely unaware of the lies and welcomes mainland China completely. As a result, Yang said, many notorious communist party members who have violated human rights and persecuted Christians have entered Taiwan in the name of religion. Once in Taiwan, these individuals work with the TSPM to infiltrate Taiwan. On the other hand, Yang noted that it is hard for Chinese rights activists, such as blind lawyer Chen Guangcheng, and others who benefit Taiwan to come to Taiwan.

In the hearing, Guo cited the Beijing Shouwang Church persecution, the Ye County Missionary case of Henan Province, and the Taiyuan Enyu Bookstore case as examples of the Chinese government’s persecution of Christianity. These incidents, as well as many others, have forced house churches to go underground. Guo also pointed out that the TSPM is a tool by which the government controls believers, suppresses house churches, and infiltrates regions outside mainland China.

Many high-ranking officials of the TSPM are communist party members, such as Pastor Li Chuwen of Shanghai International Church. Li was previously the deputy director of the Hong Kong branch of Xinhua News Agency, senior pastor of the Beijing TSPM committee, and the deputy secretary of the Chinese Communist Party at the Chinese Academy of Social Sciences.

Because of the lack of religious freedom in China, Guo suggested that the identity of religious figures from mainland China applying for a permit to visit Taiwan should be confirmed by Taiwan or the United States, not by Chinese authorities.

1. Taiwan should ban officials of the Chinese State Administration of Religious Affairs and high-ranking clergy of the TSPM from visiting Taiwan because these organizations are totalitarian machines that violate religious freedom and suppress house churches inside China. These organizations also engage in espionage outside of China by using religious agents and deception to infiltrate and threaten the freedom of religion in Taiwan.

2. Taiwan should investigate religious figures from the Taiwan Christian community who are rubbing shoulders with Chinese religious espionage agencies, such as the TSMP, have received bribes, and are involved in activities which harm freedom of religion and national interest in Taiwan.

3. Taiwan should invite persecuted Chinese house church believers to visit, expose the reality of persecution in China and guard against the United Work front displayed by the Chinese communist government.

Conclusions reached at the end of the hearing aim to guard against the United Work front of the Chinese government through religion. The conclusions of the assembly follow:

2. The National Security Bureau, Ministry of Internal Affairs, and Ministry of Foreign Affairs are advised to conduct a special case study on the assumption that China may use the Trade in Services Agreement to conduct infiltration in the name of making investments. These agencies should also conduct an investigation on the organizations involved in exchange programs with the Chinese TSPM. The investigation results should be reported during legislative meetings.

3. The Joint Review Committee of the Ministry of Internal Affairs should recruit members from the outside. The criteria for reviewing visitors from China should be made transparent and known to the public. A friendly mechanism should be set up for Chinese human rights activists to visit the country. Given the United Work front presented by the Chinese government, Chinese visitors with a record of human rights abuse should be subjected to strict surveillance. Those violating the ideals of religious freedom, democracy and freedom, and basic human rights should be denied their application to visit Taiwan. Those who have entered Taiwan but are identified as guilty of the aforementioned practices should be deported immediately.

4. At present, laws and regulations pertaining to national security cannot prevent Chinese violators of religious freedom, democracy and freedom, and basic human rights disguised as professional figures from entering Taiwan. New laws need to be drafted as soon as possible to address this problem.

5. The National Security Bureau is advised to set up a database with the names of notorious human rights violators in order to prevent violators from entering Taiwan, including those entering through the Trade in Services Agreement and in the name of setting up representative offices. Referencing the D-160 non-immigration visa application form of the United States, Taiwan should demand that Chinese visitors submit a written reply concerning their involvement in human rights abuse, overseas legal charges or lawsuits, involvement in the harvesting of human organs, and involvement in other activities pertaining to national security. Those giving untrue information should be denied entry into Taiwan or deported.

6. The identity of religious clergy should be confirmed by relevant religious organizations in nations or areas with religious freedom instead of by the Chinese authorities alone.