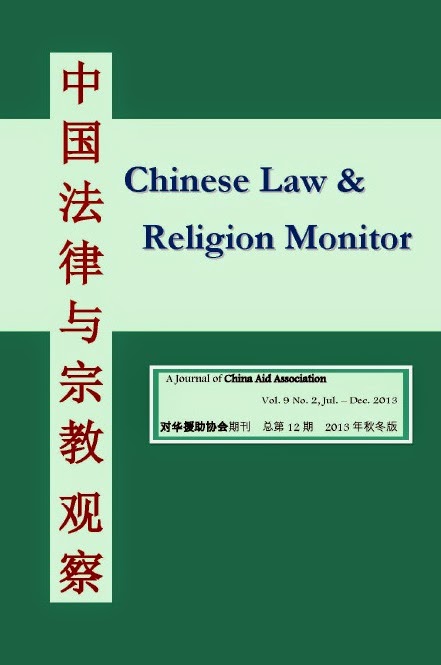 
This is the last issue of China Aid Association’s Chinese Law and Religion Monitor. Initially a quarterly, it later became a semi-annual publication. A total of twelve issues have been published, all devoted to innovations in theories on religion and the law as well as testing these theories by putting them into actual practice through ChinaAid’s causes and activities. The integration of the empirical methodology of science and the Christian ethics upheld by ChinaAid has markedly promoted freedom of religion, the rule of law, and civil society in China, whether in ideological concepts or actual practice.

The four papers in this Fall-Winter 2013 issue of the Chinese Law and Religion Monitor explore the relationship between religious freedom and the law, as well as the socio-cultural effects of their interaction. The topics include key academic research points from the sociological perspective, the influence of Christian faith and ethics on the Western judicial system and the free market, the Christian theological view of “man’s evil nature” as the original rationale for constitutional government, and Christian faith and ethics as the foundation of constitutional government and the resulting elevation of human freedom and social civilization.

1. In “A Research Agenda for Religious Freedom in China,” prominent Chinese-American sociologist Yang Fenggang points out that research on religious freedom in China has great potential, but it needs to be centered around three key points: conception, regulations and civil society. In China, [because] atheism is the basis for the concept of religious freedom, it has not kept up with the laws and regulations on religion and Communist Party policies, all of which greatly interferes with the implementation of laws and regulations on religion and results in [China] falling short of international standards. As for the third point, a grave shortage exists of research studies on religious groups and civil society organizations defending religious freedom.

2. In “A Response to the Dual Challenge of the Free Market and Social Justice: Christian faith and the Western legal tradition in the context of globalization,” well-known Chinese scholar of constitutional philosophy. Yang Shen argues and shows that various social ideologies and movements criticizing the free market and constitutional democracy arose in Europe and the United States during the Enlightenment. On one side were Nazism and the Stalinist model, which rose up and were defeated, while on the other side, the social welfare ideology emerged in Europe and the United States. In the tide of globalization, Asian countries as a whole have unique characteristics when compared with constitutional governments that originated in Britain and the United States. Are Christianity and the Christian church outdated? Is Christian justice monism still applicable? This paper points out that Christian ethics and public engagement, along with systematic and multi-layered judicial justice, regulate the “game” between capital and labor by way of interactions among multiple communities, better achieving balance and control of the free market and social justice.

3. In “Christian Constitutional Government and Theories of Human Nature,” well-known Chinese house church pastor Man De (pen name of Baosheng Guo), who lives in the United States and pastors a Chinese church there, points out the close relationship that exists between the theory of human nature, i.e. the determination of man’s moral nature and rational capacity, and the theories and practices of constitutionalism. Man is completely morally depraved, is powerless to attain salvation and perfection through his own efforts, and has limited reason and knowledge. In short, by expounding on that, the Christian theory of human nature surpasses that of other religions, naturally becoming the foundation for building the theory of constitutionalism. From the three perspectives of Biblical text, Christian doctrine and theology, and the history of theological thought, this paper explores the influence of the Christian view of human nature on the concept of constitutionalism. In Christian doctrine and theology, the total depravity of human nature after the Fall and the view of “salvation by God’s grace alone” emphasize man’s evil nature. As far as the history of Christian theological thought is concerned, whether it was the Apostle Paul, Augustine, Aquinas, Martin Luther or John Calvin, they all expounded brilliantly on the evil of human nature and the checks and balances upon it, profoundly influencing Western ethics and the history of Western political thought.

4. In “The Advance of Civilization: the deepening growth of Christianity in China,” well-known Chinese house church scholar Mark Chuanhang Shan, currently living in the United States, expounds on the four components that make up the ecosystem for an ideal social civilization: divine faith, a code of ethics, constitutional government, and human freedom. This model of Christian civilization shows that constitutionalism is not “water without a source” but rather that it can function normally only upon a foundation of faith and the ethics of that faith, thereby safeguarding citizens’ rights and human freedom. From this, we can also see that Christian civilization is the native environment for constitutionalism and human rights.

To sum up, the central topic of the four papers is religion, in particular Christianity, and the significance of religious freedom for constitutionalism and social civilization. It is inevitable that the development of Christianity in China, including government-sanctioned churches but in particular the increasingly mature house churches, will exert a broad influence on people’s awareness of faith, produce socially progressive ideologies, and as a result, advance China’s political ecosystem, civil society, and the rule of law, and promote China’s overall social civilization.

As some scholars have pointed out, the corruption of human society and the decline of powerful nations, if not caused by interference from outside forces, always begins with ethical and moral corruption within a society. Christianity created a glorious civilization in the West, but today, the Christian-influenced ethical system is facing unprecedented challenges from political pride and democratic bias and is rapidly declining in Europe and the United States. “Desolations have been decreed.”

On the other hand, Chinese society is at the point of going through a [process of] fission and re-composition of its civilization; Christianity is sprouting like buds in the spring and roaring like the surging tides. Who can stop such a robust advance of civilization? Not only that, to our great amazement, the ethics of the Orthodox Church is already being resurrected in Russian society on the platform of the church, and this once-glorious civilization is on the verge of shining again. Thus is the curtain slowly rising to reveal a new era in the history of human civilization.

A Response to the Dual Challenge of the Free Market and Social
Justice: Christian faith and the Western legal tradition in the context of
globalization……………….…by Yang Shen …………….………31

The Advance of Civilization: the deepening growth of Christianity in
China……………..…by Mark Chuanhang Shan…….………..…92

A free e-version of the full text is available and downloadable here: https://drive.google.com/file/d/0B024UfutRtHoM2haLUgyZkcycW8/edit?usp=sharing