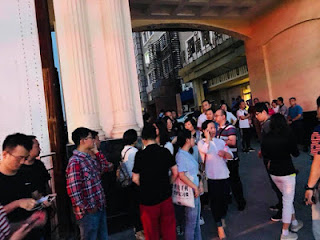 (Beijing – July 16, 2019) ChinaAid recently learned about activity by authorities in Beijing against believers who attended a Christian fellowship in a restaurant on April 1.

Reports say an Assembly of God Church in the area held a women’s fellowship at Jinshilin Restaurant in Chaoyang District, Beijing, on the first day of April. 22 attendees prayed together and welcomed four members who returned from an Israel trip.

According to a believer named Ms. Yin, servers often came in and out of the room unprompted. The next day, Yin and another believer were detailed and interrogated at the Chaoyang Police Station. Yin managed to flee to the United States after her administrative detention expired.

However, those close to the other believer still have difficulty locating her.

Yin says police accused her of attending unlawful gatherings, including events associated with the Shouters. The group is a Christian sect operating out of Taiwan and considered a cult by Chinese authorities. Officials have long used accusations of cult participation to detain Christians.

Beijing has long been a hotbed for Christian persecution.

Extensive coverage by ChinaAid reveals struggles by the leadership and congregates of Zion Church, one of the biggest underground churches in the capital, as they grappled with authorities who tried to force surveillance camera installation and ultimately shut down the house of worship last September.

On Sunday, ChinaAid published a letter from Zion Church Pastor Jin Mingri, also known as Ezra Jin. Jin recounts trials his daughter is facing as she attempts to return to the United States to pursue a law degree.

He says border security refuses to let her leave the country due to “having the risk of harming the country abroad.” Jin also writes he is unable to sell his home in Beijing since authorities froze the property.