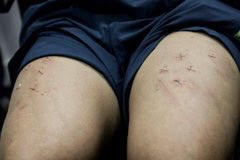 (Hong Kong—Aug. 11, 2017) Chinese authorities drove staples into the limbs of a pro-democracy activist in Hong Kong today, forming cross shapes on his legs.

According to The New York Times, Howard Lam, a member of Hong Kong’s Democratic Party, displayed wounds he suffered after Chinese officials kidnapped him and stapled his legs for writing to F.C. Barcelona to request a signed photo of soccer star Lionel Messi on behalf of the late Liu Xiaobo. Liu, a Nobel Peace Prize laureate and jailed Chinese dissident who was a fan of Messi, perished last month after prison doctors failed to diagnose him with liver cancer until he was beyond hope for treatment. Lam had requested the photo in hopes that he would be able to get it to Liu before his death.

Since Lam did not receive the photo until after Liu died, Chinese officials grew concerned that he would attempt to give it to Liu’s wife, Liu Xia. After an acquaintance from mainland China warned him not to send the photo, two men caught him during a shopping trip and shoved him into a van, claiming they wanted to “chat.” He then had his phone taken away and was forced to breathe a substance that caused him to pass out.

When he regained consciousness, he was bound, and officials interrogated him about Liu Xia, using swear words common to the northern portions of the mainland. During the questioning, one government agent said he would “give [him] some crosses” after asking Lam whether or not he was a Christian and why he didn’t “love his country and his religion.” He proceeded to press staples into cross patterns in his legs. Then, Lam says he was given another substance, which caused him to pass out again.

He woke up on a beach in Sai Kung, Hong Kong, at 1 a.m. the next day. He hailed a taxi and notified Hong Kong’s Democratic Party.

He chose not to receive treatment until after he could share his story with the press. After visiting the hospital, he called the police. The case is currently at the West Kowloon Regional Crime Unit. Lu Weicong, the police commissioner, said that the police are highly concerned about the case. He reiterated that it is illegal for officers from other regions to enforce the law in Hong Kong.


This abuse is the latest in a series of violations that the Chinese government has enacted against Hong Kong. As a city subject to the Communist Party, but granted greater freedoms than mainland China, Hong Kong has experienced an increase in crackdowns on voices of dissent, stirring concerns for the future of human rights in the port city.

ChinaAid reports abuses, such as those suffered by Lam, in order to stand in solidarity with the persecuted and promote religious freedom, human rights, and rule of law for all those under the Chinese government’s jurisdiction.