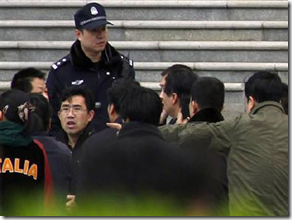 By Chris Buckley
BEIJING | Sun Apr 10, 2011 1:38pm IST
BEIJING (Reuters) – Hundreds of Chinese police scrambled to prevent a planned outdoor service by a “homeless” church on Sunday, shoving people into vans and buses in the latest show of the Communist Party’s determination to smother dissent and protests.
(Photo: Uniformed and plainclothes police surround a man at the site of a proposed church gathering at a shopping area in Beijing April 10, 2011. Credit: Reuters/David Gray)

The confrontation came in northwest Beijing a week after the detention of well-known artist Ai Weiwei, the most internationally prominent Chinese human rights advocate held by police during a wide security clamp down.
The Shouwang Church, a Protestant group with about 1,000 members, had urged members to gather for the outdoor service after they said official pressure forced the church out of a place of worship it had been renting.
But hundreds of police officers covered the area in the Zhongguancun commercial district, where the Shouwang Church had planned to worship, deterring any effort by church members and supporters to gather for the morning service.
The government has been alarmed about calls for protests inspired by anti-authoritarian uprisings across the Middle East, and that appears to have prompted Beijing to move against the church. Police cordoned off the broad, elevated walkway where a mobile phone text message said the service would happen.
Police and plain clothes guards took away dozens of people, although it was unclear how many were church members, supporters or bystanders. Police monitoring vans, bristling with antennae and communications dishes, stood nearby.
“I think this reflects the overall panic mood of the government leadership over what’s happening in the Middle East and north Africa,” said Bob Fu of the China Aid Association, a Texas-based group critical of China’s controls on religion, which has monitored the Shouwang Church dispute.
One of the people taken away by police was a silver-haired man who could be seen holding up a red book, possibly a small bible or worship book. He shouted as he was pushed onto a bus being used by police. Others taken away included neatly dressed men and women in their twenties.
Police officers told one church elder the planned service would be an “illegal gathering”, said Fu.
“I don’t see any possibility that the government will yield to its demands, given the climate there,” he said in a telephone interview. “It’s reasonable to expect more clashes.”
Police kept church elders and pastors in their homes to stop them trying to attend the service, and some were held in police stations, said Fu.
“Many members of the church are professionals and students, and some are human rights lawyers, which also makes the church a target,” he added.
“NOTHING HAPPENING”
Reuters reporters were kept away from the site of the planned service and followed by police officers, making it impossible to speak to anyone, and were then shoved away by plain clothes guards who would not say who they worked for.
“We will live up to our duty to protect stability in Beijing. There’s nothing happening here,” said one police officer who stopped and checked reporters.
The scene echoed past weeks when hundreds of police and guards warded off any attempts by would-be protesters to gather in a downtown shopping street in answer to an online call for a “Jasmine Revolution” inspired by uprisings in the Middle East.
Alarmed by such calls, Chinese authorities detained many dozens, if not hundreds, of dissidents, human rights activists and persistent protesters. Many remain in custody.
Ai Weiwei, an artist who has juggled an international career with a life as a rights advocate, was detained by police a week ago, and the government has since said he was suspected of “economic crimes”.
His family has rejected that charge as an unfounded excuse for hitting back at Ai’s outspoken criticism of the government.
On Saturday, China’s government dismissed a U.S. State Department report that said its human rights restrictions and abuses were worsening, saying it wanted no interference in what it deems internal affairs.
China has about 40 to 60 million Protestant Christians, divided between official churches, which accept state oversight, and unregistered ones, which reject such controls. Restrictions on unregistered “house” churches across China have eased in recent years, allowing them to grow and become more settled, sometimes reaching some accommodation with officials.
The Shouwang Church is one of the biggest Protestant congregations in Beijing that has expanded beyond the confines imposed by the Party.
Earlier, church members told Reuters that they did not want to become embroiled in politics and just wanted somewhere permanent to worship after years of moving from place to place when landlords came under pressure from police.
“We’ve been hoping for a long time to find a place to call our own, but each time there’s been some opportunity, we’ve been forced out,” said a Shouwang Church member, Cao Zhi, in an earlier interview.
A member of the church said later on Sunday that he and other members decided to pray together in small groups outdoors after it become clear police would stop the attempted service.
(Additional reporting by Maxim Duncan and David Gray; Editing by Robert Birsel)
http://in.reuters.com/article/2011/04/10/idINIndia-56238520110410?pageNumber=1