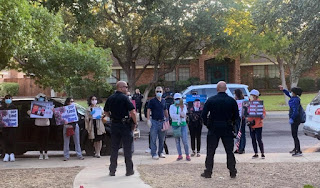 On Sunday, at least four busloads and cars with out-of-state license plates descended on the home, surrounding it and forcing police to form a cordon between the sidewalk and Fu’s front door. The protesters distributed flyers throughout the neighborhood and to nearby churches, and called Fu a “fake pastor” who tops a list of “evil cheaters.” In video online, Guo says, “We will never retreat. We will not start another campaign until we are done with you.”

Amid Guo’s threats to Fu, law enforcement agents—including the FBI, state officers, and local police—intervened to remove Fu and his family to a safe location.

Fu, 52, became a Christian and started an underground church in China. In 1996, Chinese Communist Party (CCP) authorities jailed Fu and Heidi, his wife, for their activities. When released two months later, they escaped to Hong Kong, and then exiled to the United States. Fu founded ChinAid in 2002.

ChinaAid supports churches and pastors in China, while the association simultaneously documents and publicizes the CCP’s intensifying persecution of Christians and violations of religious freedom.

One government source stated: Guo excels in sowing chaos and disruption. With his U.S. and Chinese Communist Party connections, Guo’s repeated incitement to violence constitutes a serious matter the FBI must address by the highest levels of Intelligence.

Fu believes that the CCP stands behind Guo’s sophisticated campaign. He stressed, “They are taking advantage of our freedom of speech to [try to] destroy ChinaAid, to threaten me and my family.”

On a phone at an undisclosed location, Fu told Belz: “The threat is very real.”