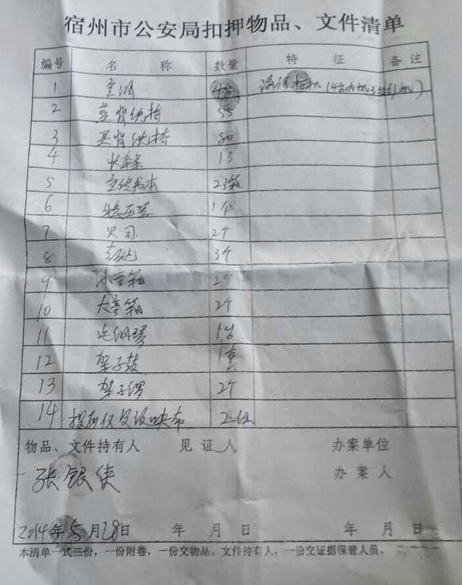 (Suzhou, Anhui—July 9, 2014) In late May, Domestic Security Protection Squad agents and representatives from the Religious Affairs Bureau in China’s coastal Anhui province entered and searched a home that is used as a gathering place for a small group of Christians, leaving one person severely beaten.

Wang Xuexia, who owns the home, said that she regularly has friends and family over to sing hymns and study the Bible. The group was doing just that on May 28 when more than 20 local officers came to the home. While there, officers beat Wang’s nephew and threatened the rest of the attendees. In a statement, below, Wang described the events that occurred.

My name is Wang Xuexia and all my family members are Jesus’ followers. We are a Christian family. At noon on May 28 while my husband was not at home, more than 20 relatives and friends gathered together to study the Bible. There were a few friends from South Korea among us

As we were preparing to have lunch, suddenly a group of people appeared at our door. There were more than 20 of them. Some of them were in police uniforms, but many of them were not in police uniforms (later, we learned that they came from the branch of the Development Zone, Suzhou Municipal Public Security Bureau, the Bureau of Religion and Domestic Security Protection Squad). Upon entering my home, they blocked all the doors. One of them shouted in a loud voice: “Freeze! Everybody freeze!”

My nephew came out and asked: “Who are you? What do you want?”

Before he could finish what he was saying, three people came over to him. Without saying anthing, they gave my nephew a round of punches and kicks. Other people found the beating outrageous, hurried over to them, and dragged my nephew out of the room. However, these three people wouldn’t spare my nephew and continued to kick him.

I said hurriedly: “I’m the head of the house. Please tell us what you want.”

However, the people who came into my home wouldn’t listen to me and told all of us to show them our IDs. My relatives, friends, and I actively cooperated with them, took out our IDs, and had our information booked by them. After they booked our information, they took away Yue Wenmei and Wang Jie and dispersed other people. Now, it was time for my child go to school. So, I told another nephew, on my sister’s side, to take care of the house while I unhurriedly took my child to school. When I came back home, I found my nephew had been driven outside the house while those people were turning up everything in my house unscrupulously.

Some other people were removing stuff from my home, including Bibles, Christian books, tables and chairs, an audio system, musical instruments, a projector, and other items. They even dismantled my house’s air-conditioner and hauled it away. We used all these items during the gatherings. They went downstairs and took away our rice, flour, oil, eggs, wok,s and even clothes hangers. I don’t know what they want these items for. It’s like they were searching my home and confiscating some of our possessions. I then hurried upstairs to my bedroom. There, a man and a woman were turning up my personal items. I questioned them: “Why are you turning up my stuff?”

That man viciously threatened me: “Don’t talk, or we’ll take you away!”

I again said in a loud voice: “Why do you think you can do this to me? Why can’t you wait until my husband comes back?” They said ours is an illegal gathering and that we were trying to subvert the Party and the government. [But] they don’t have anything to support them in saying these words. We never had any intention or ideas of opposing the state or the people. We are just a Christian family. In our home, some of my relatives and friends gather occasionally to study the Bible, pray, and share some of our testimonies. It is purely a household gathering in China. Though we have some foreign friends here, they also studied the Bible, prayed and shared their testimonies with us.

However, they wouldn’t listen to our explanations and requests. They told the two people downstairs to drag me downstairs by force. They took away my blue handbag, toilet paper, facial masks, other cosmetics, and many other personal items. During the entire process, no one showed us any identification papers.

I was under the control of two people in the [another] room. As I didn’t know what was going on, I was angry and worried, and I couldn’t breathe well. Now, my face was turning purple. When my nephew on my mother’s side saw this, he was shocked and asked them in a loud voice: “What do you really want?”

They came, beat my nephew, and then took him away in a vehicle. I was so angry that I passed out. When people saw this, they knew I was in dange,r and I mustn’t go it alone. They called my cousin and told her to come as soon as possible. Soon after this, my cousin and several of my friends came and put me in a tricycle. By this time, I couldn’t talk at all. They hurriedly called for an ambulance. Before the ambulance came, my family wanted to give me a bottle of mineral water, but these people wouldn’t let them give me the water.

From the time I passed out to the time I was hauled away by the ambulance, they didn’t even cast a glance at me and wouldn’t care if I was alive or dead. All they cared was removing stuff from my home, and they even dismantled my air-conditioners. The total value of the items taken from my home is worth over 100,000 yuan (US $16,100). This is the entire process that happened in my house on May 28.

After that, my husband came back, and he went to the Suzhou Municipal Public Security Bureau and asked them for the items they had taken away. He asked them why they hauled away our possessions from our house. They still said that our gathering was illegal and that we were illegally receiving foreigners. They also said the items were seized and confiscated and gave us an incomplete list of seized items. When they hauled away my items from the house, they didn’t let us check the quantity. They wrote the list.