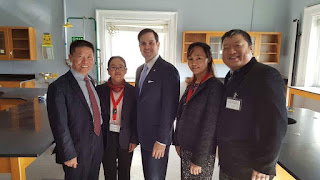 (Changsha, Hunan—Aug. 23, 2017) A Christian human rights lawyer was forced to confess to a state subversion charge yesterday and indict himself as someone who spread so-called “rumors” about the torture of another human rights attorney.

“I fully realize that my actions of inciting subversion of state power and overthrowing the socialist system violate the law and constitute crimes,” said Jiang Tianyong, a lawyer who has been in prison since Nov. 21, 2016, for his defense of human rights. He continued by saying that he was ashamed of his supposed crimes, and that they “not only harmed the country and society, but also brought great pain to my parents.” His statement shares similar content to other so-called confessions of human rights lawyers who were forced to admit their guilt, making it likely that the statements were written for him and that authorities used coercive measures on him.

Additionally, Jiang admitted to organizing efforts to spread “rumors” about the torture of fellow human rights lawyer, Xie Yang. Police took Xie into custody on July 11, 2015, during a nationwide crackdown on human rights lawyers. In January 2017, Xie said in a written declaration, “I have been suffering from all kinds of severe abuse and torture since I was arrested on July 11, 2015 … If someday I admit any guilt, whether in written form or voice recording, it would definitely not be out of my own will. It would be either caused by continued torture or to get a chance to be bailed out and reunited with my family. Both my family and I are under immense pressure now as the officials ask me to confess and stop talking about my torture.”

When Xie was tried on May 8, he was forced to recant his torture allegations and confess to his supposed crimes.

Jiang’s family and lawyers were never notified of the trial, his wife, Jin Bianling, said on Sunday. Jin escaped China and now lives in the United States, where she has testified in front of Congress on behalf of her husband.

ChinaAid exposes abuses, such as those experienced by Jiang Tianyong and Xie Yang, in order to stand in solidarity with persecuted Christians and promote religious freedom, human rights, and rule of law.