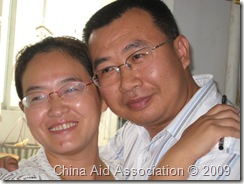 In late November 2016, Jiang traveled to Changsha, Hunan, where he visited Chen Guiqiu, the wife of imprisoned human rights lawyer Xie Yang. He informed his wife that he was about to board a train returning to their home in Beijing at 10:22 p.m. on Nov. 21, 2016, and then vanished.

After a month of wondering whether he was even alive, he was found to be in an unofficial “black jail.” He was formally arrested on May 31, 2017, and he remained out of contact with the outside world for 10 months.

During his trial, prosecutors treated statements Jiang had made since 2009 in addition to his acts of helping his colleagues, wrongly imprisoned human rights lawyers Zhou Shifeng, Zhang Kai, and Xie Yang, as evidence of his crime. Under authoritarian pressure, Jiang also plead guilty to fabricating a rumor that Xie had been tortured by authorities, despite Xie’s mistreatment having already been proved. As a result, many suspect that officials violated Jiang’s right to a fair trial by controlling the hearing.

Wives of persecuted lawyers and tireless advocates for rule of law Wang Qiaoling, Li Wenzu, Yuan Shanshan, and another woman named Ermin were traveling to Changsha to deposit money and clothes for Jiang when they heard he was to be sentenced, and they attempted to attend the hearing. However, the police were alerted, and all roads within a one-kilometer radius of the court were blocked off. Outside of the court, several casually dressed officers brought Wang and Li to an unmarked car. Wang later told ChinaAid, “They twisted my entire body around, broke my wrists, and pinched me behind my cheeks. It was so painful that I couldn’t even speak. They other two police officers in plain clothes pushed Li Wenzu to the ground and dragged her for 50 meters. Her jacket was ripped off, and her phone was also stolen.”

In her own recounting of the incident, Li said, “The police in Hunan were fierce and brutal. I almost suffocated when I was dragged on the ground with the jacket covering my nose.”

The two women were then held for 10 minutes at the Changsha Cadre Training Center, but they were separated from both Yuan and Ermin for awhile before being reunited.

Jiang’s father also traveled to Changsha to attend the trial, but he was only notified of it the day before and accompanied by officials. Even though Jiang’s sister, who has reportedly wasted away due to the events of her brother’s case, wished to attend, she could not obtain permission to do so.

Jiang’s wife, Jin Bianling, now lives in California and has traveled with ChinaAid to Washington, D.C., to advocate for her husband’s release. In response to his verdict, she said she will “never accept it” and “never acknowledge it [as legitimate].”

In a letter, fellow human rights lawyer Xie Yanyi says Jiang “could have immigrated with his wife and daughter and left this turbulent country [China], he could not abandon his hometown, family members, and friends. he values friendship and love more than anything, and he still has faith in humanity and justice. His heart is full of love.”

In response to the sentencing of lawyers like Jiang, concerned sympathizers have been sharing a motto online, which reads, “We cannot leave Prometheus to die on the rock.”

Bob Fu, ChinaAid’s founder and president, also weighed in on the verdict, saying, “The sentencing of  Christian human rights lawyer Jiang Tianyong serves as yet more proof of the Chinese government’s heinous abuse of human rights and rule of law. ChinaAid calls on the people of the free world, especially its leaders and policymakers, to publicly speak out against this obvious violation of Jiang’s rights and pressure China to free him immediately and unconditionally!”

ChinaAid exposes abuses, such as those suffered by Jiang, in order to stand in solidarity with persecuted Christians and promote religious freedom, human rights, and rule of law.