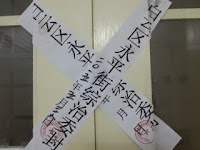 Reported in Chinese by Qiao Nong. Translated by Carolyn Song.

On Nov. 26 and 27, officials from the public security and religious affairs bureaus surrounded Gospel Drug Treatment Church, confiscated its computer and religious materials, banned it from holding religious services and dispersed Christians gathered there. Around the same time, the church’s leaders, Lin Haixin and his wife, who are originally from Hong Kong, were detained, with their current situation unknown. However, some Christians speculate that they were taken away for holding so-called “illegal religious activities” without registering.

For two consecutive days, church members attempted to contact the couple, who both hold Hong Kong residency, but could not reach them.

The church specializes in helping people with addictions, mental health problems, gambling habits, alcoholism, etc., free of charge via the use of Christian rehabilitation centers in Zhaoqing, Guangdong, and Lijiang, Yunnan. Many of its members were former patients who reported vast improvements after their treatment. In the three years since its establishment, it has served more than 180 people.

In June 2015, the religious affairs bureau issued an administrative penalty notice that accused Lin of using the guise of a pastor to conduct religious activities and warned the church to stop holding these events. On the same day, Lin wrote a defense to the religious affairs bureau, reiterating that he is just someone who came from Hong Kong to help those suffering from addictions and psychological disorders. Nevertheless, authorities detained him a year later.

China Aid reports on abuses, such as those experienced by the members of Gospel Drug Addiction Treatment Church, in order to stand in solidarity with persecuted Christians and promote religious freedom in China.