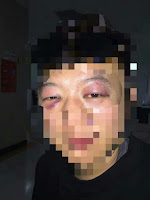 (Langfang, Hebei—Jan. 4, 2017) Several Christians in China’s northern Hebei province were hospitalized with serious injuries after gang members hired by authorities attacked them for resisting the destruction of church property on Thursday. Local Christians have taken to protest after the hospitalizations.

Local officials plotted with land developers to coerce Fuxing Church, a state-run congregation meeting in a former school building, to sign a land transfer agreement, which would force the church to move. Fuxing Church is an officially registered church in the Three-Self Patriotic Movement, China’s government-controlled Protestant church.

A church elder surnamed Han asserted that the church exists legally, was sanctioned by the government, and was open to relocating. However, the Communist Party offered them less than 2 million Yuan [$287,534.00 USD] in compensation, and they purchased the property for 3 million Yuan in 2002 [$362,319.00 USD at the time]. According to Han’s estimates, given the current price of housing, officials should have offered more than 15 million Yuan [$2,156,505.00 USD]. Because of the great discrepancy in value, the church members opposed the signing of the agreement.

Additionally, Han said, “On the morning of Dec. 29, my son and his friend went out to eat, and, when they had finished eating, came out [of the restaurant]. Seven or eight gangsters surrounded them, dragged them from the car and beat them up. His friend was injured so badly that he could barely open his eyes. He was bleeding profusely, and his nose bridge was fractured. The police came out after I reported the case, but they colluded with the gangsters. We went to the police station and recorded the incident, but nothing was done about it. On the next day, several church elders went to the municipal government to petition.”

Church members repeatedly visited government offices, but officials refused to do anything about this incident. After the Christians visited the public security bureau, gang members smashed the church’s power meter and harassed its members, who returned to petitioning government offices until authorities pressured Han to persuade them to stop.

“We are prepared to petition the provincial government,” Han said. “First of all, we are not violating any laws. Secondly, we are defending our legal rights. The believers are not afraid of any consequences, even death. Today [Jan. 2], the [Christian] brothers, sisters, and leaders from every church throughout the Langfang area came to support us, promising that they would accompany us even to Beijing. We have about six or seven thousand believers now.”

China Aid exposes abuses, such as those suffered by Fuxing Church members, in order to stand in solidarity with persecuted Christians and promote religious freedom, human rights, and rule of law in China.