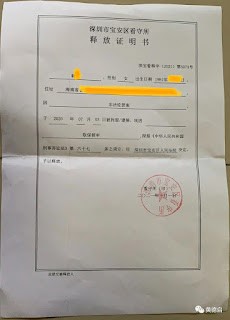 (Shenzhen, Guangdong Province—October 4, 2021) Shenzhen Christian Ms. Han Li was sentenced to one year and three months for selling Bible players. She was released on October 1 at noon. Her family notified her lawyer, Mr. Huang Deqi, and he posted her release certificate on the Internet.

Han Li worked for “Tree of Life” in Shenzhen. She was arrested on July 2, 2020, for selling Bible players. Her colleagues Fu Xuanjuan, Deng Tianyong, and Feng Qunhao were also arrested. They were charged with “illegal business operations”. After a series of trials, they were convicted on July 16, 2021. Han, as the receptionist of the company, received the lightest sentence. Shenzhen Baoan District People’s Court found them guilty and sentenced them:

The Court also confiscated all six models of the Bible players and six computers.

A Bible player is a kind of newly-emerged portable digital player. Apart from playing pre-recorded audio clips of the Bible, it also plays pastor sermons and hymns. Older Christians benefited from the easy-to-use players, but as the Chinese government continued to suppress Christianity, manufacturing and selling Bible players became illegal.

During the second trial on May 7, 2021, Han Li and Fu Xuanjuan both strongly insisted their Bible players brought great convenience to Christian life and bore no harm to society. Lawyer Huang Deqi made innocence defense for Ms. Han from the following four aspects:

Meanwhile, he pointed out Ms. Li was merely an accessory and the circumstances of her crime were negligible. On July 16, the Court decided to punish Han Li according to the internal storage—one year and three months. At that point, she already served most of her time.

Our innocence defense didn’t succeed, but considering China’s legal system, she already got a special kind of ‘innocent’ verdict because the sentence she received was equal to the duration of her detention.

~ Yu Bing, ChinaAid Special Reporter
China Aid exposes abuses in order to stand in solidarity with the persecuted and promote religious freedom, human rights, and rule of law. If you wish to partner with us in helping those persecuted by the Chinese government, please click the button below to make a charitable donation.