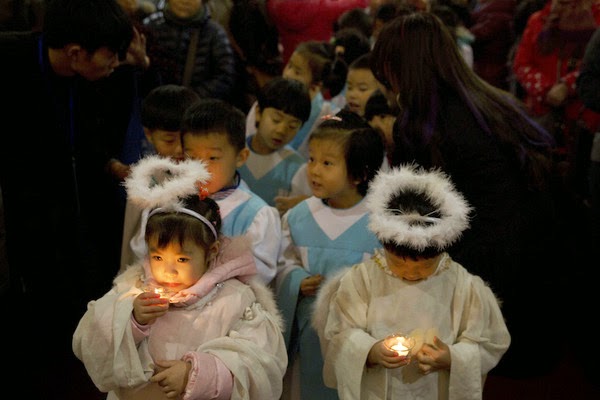 A Communist Party crackdown takes a new turn in a religious hotbed of faith on China’s east coast. Prospective party members who worship need to officially ‘rectify’ their beliefs.

Prospective Communist Party members in the region of China where Christianity is growing the fastest must now renounce religious belief, while current party members must write letters stating their rejection of faith, according to a new mandate by authorities in Zhejiang Province.

The policy comes amid extended and systematic harassment of Protestant churches in Zhejiang, with more than 450 desecrated or destroyed since November 2013. Chinese analysts quoted in state-run media say the new vetting of party members for religious belief is part of a larger campaign in Beijing against “hostile foreign forces” infiltrating China.

Wenzhou, the capital of Zhejiang on the prosperous east coast, is sometimes referred to as “China’s Jerusalem” for its high number of devout Protestants, who number at least 1 million in a city of 8 million. The area is known for its business acumen and overseas population.

Officially, Communist Party members have long been expected to enthusiastically embrace atheism and Marxism. But oversight of religious practice has been lax in many parts of China over the past 20 years, and in places like Zhejiang, it has been an open secret that some families of party members are actively practicing Christianity.

On Jan. 29, Zhejiang officials spelled out the policy, according to the state-run Global Times based in Beijing:

Checking on religious beliefs is the first step towards approving applicants to the Party, and Party members found to have participated in or embrace religions will be required to ‘rectify’ their beliefs.

The crackdown on evangelicals has been unusual for its sustained nature, and the new vetting of party members suggests that it will continue. For the first time as well, the attack on churches has reached the officially approved Protestant churches known as the “Three Self Movement” – going beyond the larger unofficial “house” church movement.

In December, a party-mandated ban on Christmas celebrations in Zhejiang was seen as an effort to single out Christians at a time when Beijing has been promoting Buddhist faith. China – which has five “official” faiths including Islam, Taoism, Catholicism, Protestantism, Catholicism, and Buddhism –announced last summer that it was creating its own official version of Christian theology.

Christians in Zhejiang, interviewed for a special report in The Christian Science Monitor, say the policy against them is carefully designed to foment a collective psychological taint on their faith among ordinary Chinese, yet not be so severe as to cause international sanction.

The Global Times quoted a professor from a prominent party college in Beijing that gave an interpretation of the latest move:

“Party members are banned from joining religions. Believing in communism and atheism is a basic requirement to become a Party member.” said Li Yunlong, a professor at the Party School of the CPC Central Committee. Li said that Zhejiang authorities stressed this basic requirement due to local situation, adding he hopes this will set an example to other provinces. “This could be a part of efforts against the penetration of Western hostile forces,” said Li.

The vetting of new party members may also be due to the attractiveness of Christianity to an urban and educated generation of young Chinese who no longer see biblical faith and their Chinese identity as incompatible.

Bob Fu, a Chinese-born Christian who runs a group in Texas that monitors religious persecution in his home country, says the new Zhejiang policy is “the newest escalation of the national campaign against religious freedom in almost all sectors of the society in China … the religious freedom of CCP members, like any other citizens of China’s society, should be guaranteed as enshrined in the Chinese Constitution and international human rights norms, including rights of choice for religious faith and freedom of conscience.”