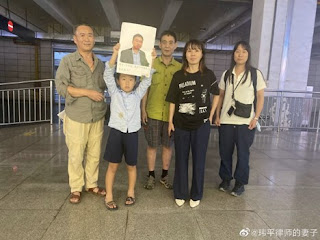 (Gansu, China—November 16, 2022) Long Kehai, a Christian from Gansu Province, will be in court today for the crime of “picking quarrels and provoking troubles.” Lawyer Zhang Keke received the notice to appear in court on November 15. The letter requires lawyer Zhang to attend the trial at the No. 1 Trial Chamber of Hui County People’s Court of Gansu Province at 9:00 am on the 16th.

Chen Zijuan is the wife of another detained human rights lawyer in Shaanxi Chang Weiping. She appealed to everyone on social media to take notice of Long Kehai’s case, who was arrested following the trial of her husband. Long Kehai used to be an employee of a railway company and was previously sentenced to one and a half years in prison for his remarks online. Before being arrested this time, he was working in Sichuan. Longnan Political Security Bureau forcibly took him back and gave him two administrative punishments totaling 20 days. A few days after his release, they took him again because Long checked into a hotel in Fengxian County the day before the trial of Chang Weiping. He was then criminally detained a few days later. 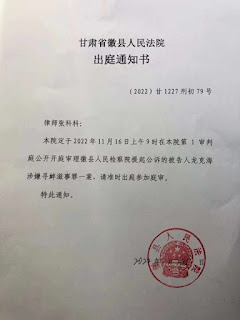 On March 4, 2019, Long Kehai was arrested by the State Security Bureau of Baoji City, Shaanxi province on the charge of “picking quarrels and provoking troubles.” He was placed under residential surveillance at a designated location (RSDL) until May 15 of the same year, and authorities formally arrested and transferred him to the Weibin District Detention Center in Baoji City, Shaanxi province. After being sentenced, Long Kehai was removed from the company he worked for.

According to Long Kehai’s social media posts during his term of RSDL, 12 guards tortured him and kept him up, continuously interrogating him in a state of fatigue. They would place him on a tiger chair, a stress position, for seven days and six nights. Only after he passed out from exhaustion was he brought down from the tiger chair. When Long Kehai was transferred to the detention center, he was tortured in various ways.

Even after Long Kehai was released from prison on September 20, 2020, he still faced various inexplicable disturbances. First of all, because of his work location, he lived in Baoji City for a long time. However, the local state security bureau forced him to leave. Long also had trouble getting access to his social security benefits and medical insurance. He tried many avenues to fix his situation but to no avail. State Security monitored and harassed him for a long time, even implicating his wife and children. Eventually, his bank account was suspended.

On July 6, 2021, Long Kehai was summoned by the “National Security Brigade” of the Public Security Bureau of Hui County, Gansu Province for “spreading rumors and deliberately disturbing public order.” His two cell phones (an Apple and OPPO phone) were confiscated in the name of “evidence preservation.” Long Kehai was also detained for ten days.

Last November, the local state security office called to interview him. Two state security officials drove a police car to the town where he lived. Their reason for interviewing him was Long’s involvement in a WeChat group named “Church Planting,” a group for Christians to connect and study together.

This February, Gansu State Security interviewed Long Kehai again because he signed a letter to support the “Girl in Chains in Feng County, Xuzhou.” During the conversation, Long Kehai attempted to persuade the state security officer to sign the letter as well after seeing that the officer still preserved a clear conscience.

On June 25, Long Kehai traveled from Longnan, Gansu to Chengdu hoping to transfer church membership to Early Rain Covenant Church. While waiting for the transfer process, Gansu State Security took him to his hometown. A Christian from Early Rain Covenant Church called the National Security Police in charge of Long Kehai’s case and confirmed that Long Kehai was in administrative detention.

To find true Christian teachings, Long Kehai moved from Shaanxi to Chengdu, hoping to become a member of the Early Rain Covenant Church. On Sunday, June 12, a small group at Early Rain Covenant Church celebrated Long Kehai and another little girl’s birthday. Long Kehai said: “This is the first time in my life to celebrate my birthday in the church. I am full of joy. Hallelujah, I thank and praise the Lord. I am grateful to the brothers and sisters in the church for loving each other in Christ. I am so, so happy!” 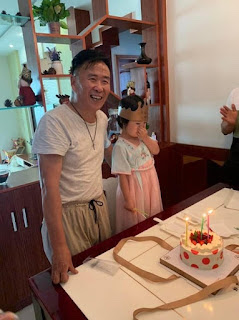 However, on the same day, Long Kehai received another “birthday gift” from the Gansu State Security Bureau – two decisions of administrative punishment issued by the Hui County Public Security Bureau of Gansu Province, each for 10 days, totaling 20 days of detainment.

A National Security Bureau officer told Long Kehai that these two punishments would not be implemented for the time being due to the pandemic. He also clearly told him, “I will not take you out of Chengdu this time. But we will be monitoring your actions to see the effect. Therefore, before the 20th National Congress, you must not make any comments that are unfavorable to the party and the government on the Internet. Otherwise, we will prosecute your old crimes and new crimes all at together and it will Increase your crime to a criminal offense.”

On July 29, Long Kehai was taken away again by state security in Hui County, Gansu province. This time, Long Kehai was taken in because he went to watch the court opening session for Lawyer Chang Weiping at Feng County, Shaanxi Province on July 25. After Long Kehai was arrested, he lost contact with the outside world. On August 4, a friend called the Gansu National Security Bureau and only then learned that Long Kehai had been detained. The National Security Bureau did not want to disclose the charges, but only said that the criminal detention notice had been given to Long’s relatives. The friend guessed that Long Kehai would be charged for “picking quarrels and provoking troubles.” It may had something to do with Long Kehai’s trip to Feng County, Shaanxi Province to watch Chang Weiping’s court session.

Zhang Keke, Long Kehai’s attorney, expressed his helplessness when he received the notice of the hearing so suddenly. “Because of the pandemic, the ten-day preparation period was also omitted.”

Brother Long has long been prepared for imprisonment, and he is no longer afraid. Instead, he is filled with the love of Christ and even loves his enemies. May the Lord take care of him and avenge him. May the Lord protect Long’s faith and give his lawyer the wisdom and courage to defend Brother Long. May the Lord especially comfort his family. May justice flow like great waters. And may righteousness flow like the rivers!