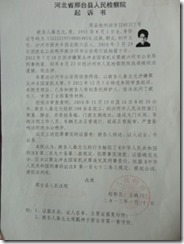 (Xingtai, Hebei–March 15, 2014) A Christian who led nearly 200 peasant workers in Hebei province to successfully defend their workers’ rights in 2010 has hired a rights defense lawyer to defend him against charges that he had organized a crowd to assault a government entity, ChinaAid has learned.

Qin Zhiyuan, a Christian from the city of Shahe in Hebei province, was prosecuted by the Xingtai People’s Procuratorate in December 2012 in an apparent act of revenge by the local government, and he has hired rights defense lawyer Lin Qilei to handle his case.
(Photo at right is a photocopy of the indictment and the characters are blurry.)

In November 2010, Qin led 194 peasant technicians who had built water conservancy projects in the 1950s and 1960s in fighting for their rights in a case that attracted nationwide and foreign attention.

Despite being detained multiple times, Qin courageously refused to be cowed, and the case was reported by China’s Democracy and Legal System Times as well as by foreign media.  The media attention prompted the Supreme People’s Court to pay attention to the case, and it entrusted the Xingtai Municipal Intermediate People’s Court to supervise it.  Consequently, the case was successfully resolved and all 194 peasant workers were compensated and their old age taken care of.

Now, however, it appears that the local government is trying to settle accounts with Qin.  In March 2012, he was placed under criminal detention, the first step to a criminal prosecution.  In August 2012, he was formally arrested, and in December, he was indicted.  The government said that when Qin and the workers demanded that the court handle their case, this constituted the crime of “assembling a crowd to assault a state agency.”

ChinaAid will continue to monitor developments in this case.