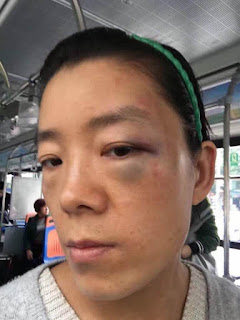 (Urumqi, Xinjiang—Oct. 16, 2017) After long periods of authoritarian pressure, the family of an imprisoned human rights lawyer’s wife severely beat her last week for her refusal to divorce her husband, who is imprisoned in China’s western Xinjiang.

Li Aijie, the wife of human rights attorney Zhang Haitao and mother of their young son, has been continuously advocating for her husband’s release since he was apprehended on June 26, 2015. As a result, authorities put continuous pressure on her family, even  intimidating their 80 year-old mother and causing her brothers’ employers to threaten them with suspension from work if she petitioned again. To alleviate the pressure, the family begged her to divorce Zhang, but she refused, so her siblings beat her brutally on Oct. 9. By the time she escaped, she had a black eye, suffered from a headache and nausea, and suspected that she had a brain injury.

Zhang was sentenced to 19 years in prison and deprived of political rights for five years and fined 120,000 yuan (U.S. $18,000) for sending 69 WeChat and 205 Twitter messages pushing for human rights in China, subscribing to and writing for the Chinese news source Boxun and Voice of America, accepting media interviews from overseas organizations, and discussing Urumqi’s condition during a politically sensitive time. He was initially charged with “inciting racial hatred and discrimination,” and officials froze his bank accounts and confiscated his property. He was formally arrested on June 31, 2016, for “picking quarrels and provoking troubles,” and the charge was changed to “inciting subversion of state power” on Nov. 18, 2016, at which point government personnel also accused him of “providing information to foreign powers.”

Last year, Li traveled to where her husband was imprisoned in Xinjiang after hearing reports that he had suffered acute weight loss and was being prohibited from spending time outside. Ma, the prison chief, told her that he had enough to eat and joined his fellow prisoners for regular outdoor activities, but she was not permitted to see him or allow him to meet their son, who was born after his father’s imprisonment.

ChinaAid exposes abuses, such as those suffered by Li and Zhang, in order to stand in solidarity with persecuted Christians and promote religious freedom, human rights, and rule of law.