Why many advocacy groups are condemning another’s optimistic report. 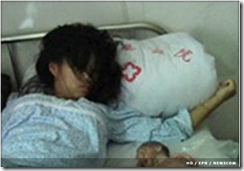 When All Girls Allowed (AGA) applauded the apparent end of late-term forced abortions under China’s one-child policy, it unleashed a firestorm. "That was the last thing we anticipated," said director of communications Kat Lewis.

After a photo of Chinese mother Feng Jianmei and her aborted baby went viral in China this summer, AGA reported in September that the Chinese central government’s family planning committee gave local officials in Chongqing written orders to stop using such abortions to enforce family size limits. "Even if that’s just propaganda, we think it’s worth highlighting because then they’re accountable for it," said Lewis.

However, fellow advocacy groups ChinaAid and Women’s Rights Without Frontiers (WRWF) pushed back.

In spite of the criticism, AGA released a second, bolder statement claiming the Chinese government was outlawing forced abortions altogether. The organization defended its interpretation by noting that its case team "has not found a single report of forced abortion since July."

The two-year-old AGA is a relatively new advocacy group that saw change where there was none, said Fenggang Yang, director of the Center on Religion and Chinese Society at Purdue University.

Yang says if some advocacy groups emphasize good news to encourage their supporters—as AGA argued it was doing—while others emphasize bad news to keep supporters motivated, the overall diversity of strategy could be beneficial.

"[But] it doesn’t look to me as though AGA is doing things strategically different," he said. "It’s just an immature reading of the situation."

AGA’s Lewis says the group does not emphasize good stories over bad ones. Positive reports do receive higher rates of engagement on social media, she said, but "it’s not about balancing the message; it’s about the reality on the ground."

And although unity would be ideal, said Lewis, the rare public spat has made more people than ever aware of forced abortion in China.

"We need to tell good news where it’s warranted," she said. "We should not exaggerate good news in order to motivate people."

Shan believes the average person in China recognizes such "good news" as propoganda.

"It is routine that the government will put on paper something that looks good, but in practice it is totally different," Yang said. "The whole policy on population control … hasn’t really changed."