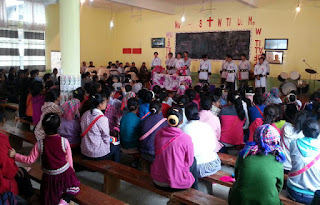 Christians held for hours after pastor tips off police

(Heshan, Guangdong—Dec. 2, 2017) Betrayed by a pastor sympathetic to the Chinese government, multiple Christians were taken to a public security bureau office in China’s southern Guangdong province and detained for hours on Nov. 19, ChinaAid learned this week.

More than 10 Christians, comprised of Sunday School teachers from the state-run Shaping Church in Heshan and their children, Guangdong, gathered at Meijia Italian Tea Restaurant for a weekly worship and personal sharing event on the night of Nov. 19. As soon as the attendees began singing, police and religious affairs bureau agents interrupted them and brought those who did not have children present to the public security bureau, where they were held for hours. After they signed an affidavit, the police released them with a warning.

It was later learned that a pastor from a government-run Three-Self Church had tipped off the police to the gatherings, which were founded and led by Shaping Church’s previous pastor, Deng Wenming, prior to his death in 2012. Deng established the meetings after conflicts arose between him and other Three-Self Church pastors. Following his death, his wife, the hostess of the restaurant, continued to hold the meetings there, even though they had no official leader.

The pastor’s motivation for informing the police is unknown.

ChinaAid exposes abuses, such as those suffered by the Sunday School teachers from Shaping Church, in order to stand in solidarity with persecuted Christians and promote religious freedom, human rights, and rule of law.