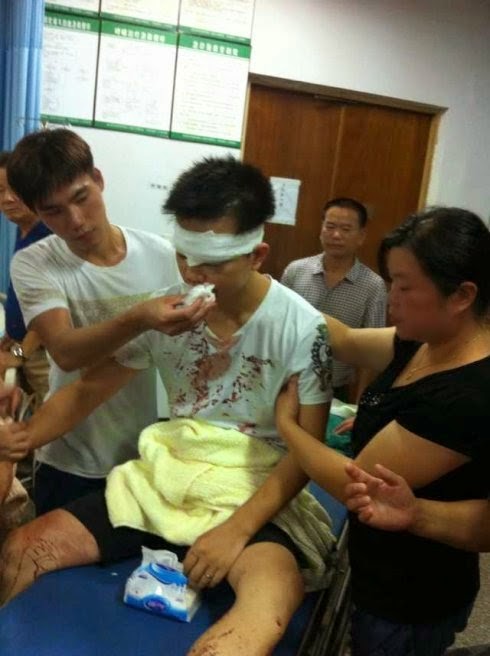 (Wenzhou, Zhejiang—July 24, 2014) A bloody altercation occurred early Monday morning when more than 600 government officials broke into a church in China’s coastal Zhejiang province and beat believers who attempted to block their entrance.

Officials were at the Salvation Church to demolish the cross topping the church for the second time in less than two weeks. In all, about 10 church members were injured.

“The incident occurred after 3 a.m., and several hundred of them came,” one Christian said. “As soon as they got out of their vehicles, they…began to smash the door. One of our [church members], who is 78, raised his hands and said ‘Don’t beat me.’ They wielded their electric batons and hit him on the head. There was a lot of blood.”

“We stood by the side of the wall and several hundred of them dashed over and were ready to storm into the church,” Mr. Xu, a church member, said. “When we wouldn’t let them enter, they began to beat us and injured many of us. An older [man] and an elder were injured, and several [men] in the rear were beaten down and lay on the floor.

“The five of us were lying in the hospital [after the incident]. Among the five, three of us have bone fractures in the head and in the eye, and I had a few stitches,” Xu said.

“A young man of about 30, Zhang Zhimin, has been vomiting blood,” another worshipper said. “In the morning, he complained about dizziness… His nasal bone is broken and his brow ridge is also broken.”

“[Zhang Zhimin] was right at the door. The police officers surrounded him and chopped and beat him in a random way,” Zhang’s father said. “They [had] black batons.”

Officials first attempted to demolish Salvation Church’s cross last Saturday, July 19, but were met with resistance from believers. On that occasion, one man attempted to take photos for evidence and was struck down by police.

“The bloody crackdown against a peaceful church and its believers is absolutely a barbaric crime,” China Aid founder and president Bob Fu said. “All those who committed this crime should be held accountable. This blunt violation of Chinese citizens’ religious freedom should be unequivocally condemned by everyone of the civilized world.

“We pray for the quick recovery of many believers who were wounded and hurt by the Chinese security. History has proved already [that] the true church of Jesus Christ will not be impeded in any way by any forces in this world. Let’s pray and anticipate another major revival coming to China.”