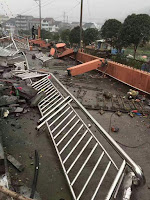 Local government departments began carrying out a missive from the Zhejiang provincial government to install cameras within churches that would assist authorities in monitoring religious activities. This command triggered an outpouring of threats against individual churches, stating that if they refused to set up the surveillance system voluntarily, officials would do so forcibly. In response, several churches in Wenzhou, a city in Zhejiang, have confronted government personnel, and members of Chenming Church demanded to know the legal bases for these measures. ChinaAid does not know the reasoning they were given.

On March 23, several churches sent a joint petition to the local government to protest the order.

Despite church members’ insistence that these actions have no legal precedent, authorities in the Tengqiao region of Wenzhou have been forcibly executing their threats. At 8:00 in the morning on March 30, officials invaded Anshan Church in Wenzhou and beat back the protestors, causing an elderly Christian woman to be admitted to the hospital from her injuries. Authorities also rammed bulldozers and an ambulance into the church’s fence, demolishing it.

On the same day, security guards hired by the government raided many other churches, including Chengan Church. Construction workers commissioned by officials also drove a bulldozer into Zhuxia Church’s fence because the members refused to install the cameras.

Meanwhile, members of Jinma Church were beaten and hospitalized for refusing to cooperate with the order.

According to Christians, authorities installed cameras in every church within the Tengqiao area, and older members of these churches were hospitalized after resisting.

ChinaAid reports abuses, such as those suffered by churches in Zhejiang, in order to stand in solidarity with persecuted Christians and promote human rights, religious freedom, and rule of law.