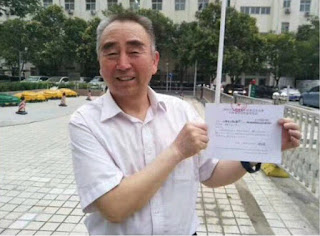 (Zhengzhou, Henan—June 19, 2018) More than 10 officials from various government departments, including the local religious affairs committee, raided Gusui Church in China’s central Henan province on May 22. The government agents forcibly removed several congregants and the lecturer for that day’s talk on laws.

During the raid, the government agents accused the church of participating illegal activities and banned it. They also broke into the conference room without any warrants, took pictures, and took notes on the member’s ID cards. Several of the church members were arrested, including that day’s speaker.

Additionally, the authorities threatened to fine the church and criminally detain its leaders if they hold similar events again.

On June 8, a church leader, Wei Jindang, filed an administrative review application with the Zhengzhou government to protest the banning of the church’s meeting place. The application demanded the various governmental organizations to investigate the religious affairs committee’s illegal actions during their raid and to protect the legal rights of citizens.

An announcement made by the church states that since Sept. 28, 2008, the church has taught its members to live according to the teachings of the Bible, including remaining obedient to the authorities. According to reports, the members are dutiful, law-abiding citizens. As a result, the government’s actions target innocent individuals for no reason and directly contradict Article 36 of the Chinese Constitution, which allows for freedom of religion and prohibits the forceful, mandated acceptance of religion from one individual or group to another.

ChinaAid seeks to document and expose the abuses committed against the Gusui Church in order to promote religious freedom, the rule of law, and human rights in China.