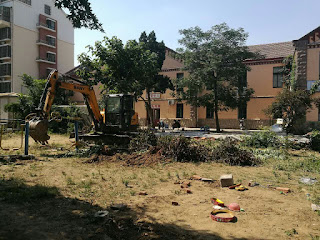 (Jiaozhou, Shandong—June 16, 2017) Several Christians received injuries on Wednesday when they attempted to negotiate with officials who had torn down their church’s fence and proceeded with a construction project without their permission.

At 5 a.m. on June 14, authorities and government-hired construction workers used an excavator to demolish Bainian Church’s fence without the church’s permission and began construction on a building. A Christian family inside the church at the time came out to stop the workers. Soon afterwards, other church members and local residents arrived at the church and negotiated with the officials, halting the construction process.

In response, the workers hit several Christian women and injured their hands.

Bainian Church Pastor Zhan Gang fears the church,—which has existed for more than 100 years—may now be at risk for demolition

Bearing a name that translates to “100-year church,” Bainian Church was founded by Swedish missionaries. For a time, it operated as a state-censored Three-Self Church, but it eventually broke ties with the government and became one of China’s unofficial house churches. Repeatedly, the church has been asked to move, but the members have refused.

When a ChinaAid reporter reached out to the Jiaozhou Municipal Ethnic and Religious Affairs Bureau for commentary, an official said, “We already investigated this in the morning. No church member was hurt. It was a neighborhood dispute instead of a religious problem … [the fence] might have caused problems for the construction. Not a single church member was hurt.”

ChinaAid reports abuses, such as those suffered by Bainian Church members, in order to stand in solidarity with persecuted Christians and promote religious freedom, human rights, and rule of law.