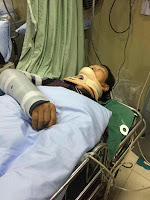 Christians report spine, neck injuries after being thrown from wall

(Wenzhou, Zhejiang—April 25, 2017) A Christian man and woman suffered spinal fractures and various other injuries after they were thrown from a several-foot high wall for defending their church in China’s coastal Zhejiang province on Friday.

As part of an official campaign to install surveillance equipment in local churches, which would allow authorities to more closely monitor religious activities, about 100 officials from various government departments in Wenzhou, Zhejiang, arrived at Banling Church at 8 a.m. on April 21 to forcibly set up cameras. They were met by an equally large force of Christians, who attempted to protect the church, and, according to a local church member, the conflict quickly progressed into a physical fight.

At one point, while officials rough-housed the Christians, a man was thrown from a wall several feet high, sustaining injuries to his neck, spine, and other bones and falling into a coma. The hospital he was taken to refused to admit him, forcing his family members to take him home. That night, the pain grew excruciating, and he was taken to a hospital in Wenzhou, where he received treatment.

Similarly, officials threw a Christian woman from the wall after others attempted to lift her onto it. She fell into a comatose state and also suffered spine, neck, and various other injuries. When she was taken to a Wenzhou hospital, doctors neglected her until her family demanded that she be seen.

Additionally, several others were hospitalized during the conflict, and one woman, Zhang Lingmei, disappeared into police custody.

In a similar incident on March 30, the members of Zhuxia Church and Xia’anshan Church successfully prevented authorities from installing the surveillance equipment.

ChinaAid exposes abuses such as those suffered by church members in Zhejiang in order to stand in solidarity with persecuted Christians and promote religious freedom, human rights, and rule of law.