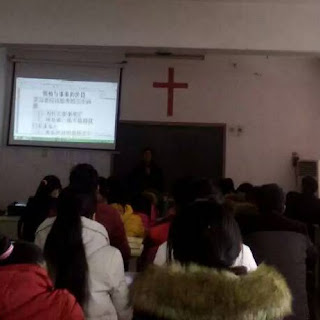 (Zhengzhou, Henan—Sept. 29, 2018) Officials in Zhengzhou, capital of China’s Henan province, sent people to blockade off the church during a service on Sunday, Sept. 16. In response, the church posted an SOS notice online, calling on all Christians in the area to support them.

The message appeared at 9:00 a.m., calling on other adherents to Christianity to help Dali Church as government officials blocked its stairwell, forcing the churchgoers to worship on the first floor. Around 300-400 Christians were present, and the authorities sent additional people to raid the church.

Just five days before, government personnel broke into the church but were intercepted as a few hundred Christians protected it.

In another announcement, Dali Church stated that the current crackdown on Henan churches, spurred by the adoption of the new Regulations on Religious Affairs on Feb. 1, is the worst the area has seen in the past 40 years. The government has ordered the removal of crosses, closed churches, smashed their possessions, and beat and harassed Christians, making it difficult for them to attend church and leaving them endangered, grieved, and enraged, but so intimidated that they fear to speak up.

All of these actions have happened to Dali Church.

According to congregants, a dozen officials from the religious affairs bureau and the public security bureau claimed that the church was not yet approved and organized illegal activities. Dozens of churchgoers had information from their identification cards taken down and had to provide their cell phone numbers to the authorities.

ChinaAid exposes abuses, such as those suffered by Christians in China, in order to stand in solidarity with Christians and promote religious freedom, human rights, and rule of law.