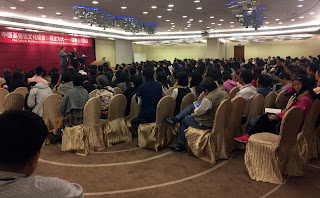 In response to a growing need for Chinese Christians to receive training not tampered with by the Communist government, the Hong Kong Cultural Mandate Association, a Christian organization based in Hong Kong, hosted The Cultural Mandate of Chinese Christians and the Lordship of Christ conference in a local hotel. Over the course of four days, Christian experts from around the world addressed theology, politics, family and marriage, and finance, in order to teach church leaders how to apply their faith to these areas.

Of the approximately 400 church leaders registered for the event, many faced personal risks for attempting to attend the conference. In a fresh revision to the Regulations on Religious Affairs, China reiterated its opposition against religious practitioners traveling abroad for training.

Authorities detained and interrogated more than 50 church members en route, barring them from participating. When one attendee heard this, he said, “I feel that, up until right now, the government still restricts the life of faith.”

Another detainee, Pastor Li Jiang, from the Hunan province, sent an apology after he was detained by public security agents. “Sorry I’m unable to make it due to the current situation,” Li said, “but [we] will pray for all of you.” 15 leaders were banned from Li’s province alone. Another, Miao Yu, was detained for 6 days for trying to attend and had his passport and ID confiscated.

Such detentions echo a pattern of persecution prevalent in the last few years. Whenever a Christian conference was held in Hong Kong, authorities would warn church members not to travel there.

China Aid reports on religious conferences, such as this training held in Hong Kong, in order to encourage persecuted Christians and promote religious freedom in China.