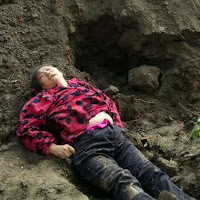 (Zhumadian, Henan—April 18, 2016) Two members of a church demolition team in China’s central Henan province buried a house church leader and his wife alive on Thursday when they tried to prevent the destruction of their church. Though the church leader managed to escape, the wife had suffocated to death by the time she was freed.

On April 14, a government-backed company dispatched personnel to bulldoze Beitou Church in Zhumadian, Henan province, after a local developer wished to take control of the church’s valuable property. Li Jiangong, the person in charge of the church, and his wife, Ding Cuimei, stepped in front of the machinery in an attempt to stop the demolition.

“Bury them alive for me,” a member of the demolition team said. “I will be responsible for their lives.”

Subsequently, a bulldozer shoved Li and Ding into a pit and covered their bodies with soil. Crying for help, Li was able to dig his way free, but Ding suffocated before she could be rescued.

On April 17, a China Aid reporter conducted a phone interview with an officer from the local police station, who stated that the two perpetrators from the demolition team are currently criminally detained while a criminal investigation team from the public security bureau reviews their case. The officer refused to disclose their alleged crimes.

According to local Christians, the various government departments managing the area did not show up to oversee the demolition. Li himself reported that police took an uncommonly long time to arrive at the scene after a report of the murder was filed.

“Bulldozing and burying alive Ding Cuimei, a peaceful and devout Christian woman, was a cruel, murderous act,” China Aid president Bob Fu said. “This case is a serious violation of the rights to life, religious freedom and rule of law. The Chinese authorities should immediately hold those murderers accountable and take concrete measures to protect the religious freedom of this house church’s members.”

Because of widespread media attention, government personnel are already pressuring Li not to disclose the details of the case. Meanwhile, Li is urging the justice system to examine the motive and circumstances behind his wife’s murder.

A video showing the extent of the demolition can be seen below.

China Aid exposes abuses, such as those experienced by Li Jiangong and Ding Cuimei, in order to promote religious freedom and rule of law in China.