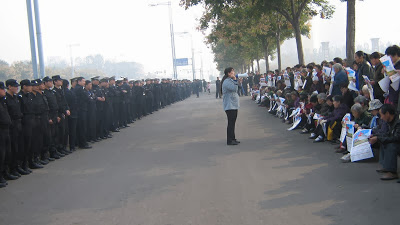 (Anyang, Henan—Nov. 12, 2013) Thousands of Christians from Anyang Church in the central province of Henan gathered in front of Anyang City Hall on Oct. 28 to protest the government’s lack of action in returning land on which the church had allowed the city to build a hospital.

The standoff was in response to a broken agreement between Anyang Church and the Anyang Department of Land and Resources.

By 8 a.m. on the morning of the standoff, police had already cordoned off the town square, on which the city hall building is located. Many local residents trying to get through were turned away. It is suspected that police knew of the church members’ plan to gather in the square.

Church members arrived at the town square at 9 a.m. The thousands of believers stood facing the police and began singing hymns.

During the time that the church group was in the square, restrooms were inaccessible. Any member who left the group to find a restroom was not allowed back in the square.

Lawyers representing the interests’ of Anyang Church were also present to confront the police about the lack of concern towards the church. While arguing with police officers, some of the lawyers were shoved to the ground.

Around 12 p.m., government officials acquiesced. The government opened negotiations, but only allowed four representatives to attend. Additionally, when one lawyer demanded permission to take a video camera to document the government’s promises in an attempt to prevent further reneging, he was denied.

At the negotiation, government officials promised the representatives an answer in three days. After the three days had passed, the church pastor called officials, but was told they were too busy. At press time, the church is still awaiting a reply.

The original agreement between Anyang Church and the Anyang Department of Land and Resources was made in 1951 with the terms of lending church land for the express purpose of building a hospital. The agreement was noted in four case files from 1951, which still exist in Anyang city archives. The agreement stated that the land would be returned to the church in 1980.

However, the Third Plenum Session in 1978 greatly impacted the agreement. Resolutions agreed upon in the session stated that “churches should return all occupied real estate and will not have payments refunded.”

Because of the agreements from the 1978 Third Plenum Session, no land was returned to the church in 1980.

On Jan. 8, 1992, five percent of the church’s original 85 acres was returned following more than a decade of disputes. At that point, government buildings populated approximately 4.7 acres of the church land.

The church tried, through various government agencies, to either have the entirety of their land returned to them or to be compensated in full. There was little help to be found.

In 2008, the hospital on the church land planned to expand, adding two new buildings. Church members filed a lawsuit against the hospital at that time, but the Anyang Intermediate People’s Court refused to hear the case.

The church was originally founded in 1887. The church’s 85 acres were purchased from the local government in November 1922. There are 16 documents in existence that contain proof of the purchase.