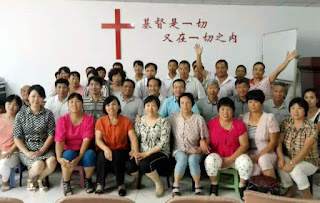 Church notifies congregation of possible fines for gatherings, saying the rulers should be obeyed.


(Yancheng, Jiangsu—July 19, 2019) The Chinese authorities sent out a notice to church members saying no house church was allowed in the area of Xiangshui County, which is located in Yancheng, Jiangsu province, because all Christians should obey the ruling party.

One of the congregations, Chengxi Christian Church issued a gathering prohibition notice of prohibition to more than 50 venues under its jurisdiction on July 9. According to the notice, at the present moment, the country’s campaign to eliminate evils, combat illegality, and safeguard the law has entered a critical period. The religious laws and regulations state that religious believers must go to the designated state-run churches to practice their religion. Under current circumstances, the governments’ United Front Work Department and the National Religious Affairs Bureau ask that all community gatherings during the weekdays be stopped.

The notice claimed that the house church gathering was illegal, disturbed others, and posed a security risk. Chengxi Christian Church also warned that if the church workers do not abide by religious regulations and continue to meet at the venues not approved by the government, the governments’ law enforcement agencies will, in accordance with relevant laws and regulations, impose fines on the leaders, the hosting families, and those Christians who attend.

The notice said, “We are Christians, and we should abide by the country’s laws on religion and go to legally protected churches to enjoy fellowship” and, “As Christians, we have to obey the rulers.”

A pastor from mainland China said that in such a harsh environment in the mainland, most underground churches find it difficult to confront the Chinese government, thus opting to remain silent. Cases in which churches warn Christians in such a way are rare, let alone issuing fines to other Christians.

In Henan province, where Christians were heavily suppressed last year, Hedazhuang Church in Shangqiu was also banned in July 2018, and now the church has become a preacher study center. According to the members of the church, it was a church in the countryside, and the church’s property was seized and no entry was allowed into the church building after it was banned.

In the past, there were more than 150 people attending the church. The same church member said, “The parking shed in front of the church was full before, and now it has been shut down, leaving only one farm vehicle parked there.” The traces of the words “God loves the world” can be seen, but it has been mostly shoveled away, and a “New Era Rural Preacher Study School” sign has been erected next to the gate.

Although the church was banned, there are still more than 30 people in the church who continue their gatherings. “Our Sunday service starts at 4:00 a.m. and ends at 5:30,” one of the 30 church members said. The early service helps them avoid government and police monitoring. He also said that they have been gathering for more than 10 years, and it has never been as difficult as it is today, but they will continue.

Some house churches have submitted to the pressure of the authorities. Another rural church In Shangqiu, Henan, was forced changed into a preacher study school, but the members still showed no fear under pressure, even when the church was seized and placed under close monitoring. They continued their gathering in the early hours of the morning.