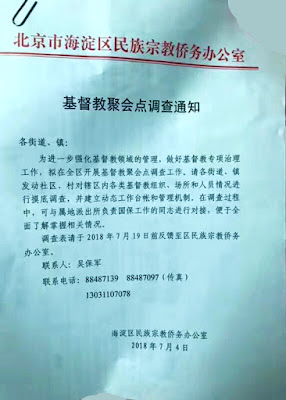 Churches across Beijing subject to investigation

(Beijing—July 15, 2018) Beijing ordered all of its districts to execute a thorough investigation of churches in early July, ChinaAid learned recently.

Haidian District’s Office of Ethics, Religious, and Overseas Chinese Affairs issued a notice on July 4, ordering government departments to make contact with churches in the area and return the information to the Office before July 19. They may also collaborate with the police in order to fully understand the situation of individual churches.

A local Christian said that such efforts to suppress Christianity have spread across the city. While Haidian District was circulating this information, the government required its personnel fill out a form, called “Questionnaire Regarding Christian Meeting Places,” in order various details about churches, including: names of meeting places, their addresses, names of landlords, church phone numbers, pastors, missionaries, whether or not the church is registered, and the age bracket of congregation members.

Ni Yulan, a member of the serially persecuted Holy Love Fellowship, an unregistered Beijing church, told ChinaAid, “(The government’s) control is more and more severe. They are preparing for further suppression by touching base and collecting information. This is only the start.”

Meanwhile, a crackdown on Christians is already underway in China’s southern Guangdong province, where the hearing to decide whether or not Bible Reformed Church will have to pay a 50,000 yuan fine will be held on July 16. Additionally, an informant from the region said that many Christians are being forced to hire lawyers from other areas of China, since the justice bureau is threatening to revoke the legal license of any attorney who represents a Christian.

Taking a stand against persecution, ChinaAid exposes the Chinese Communist Party’s mistreatment of these Beijing and Guangdong Christians to promote religious freedom, human rights, and rule of law.