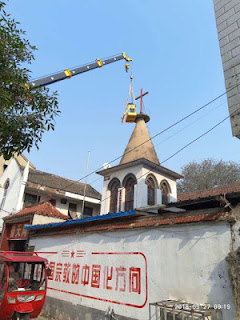 (Beijing—Sept. 20, 2019) Catholic churches run by the Chinese state have been ordered to host national flag-raising ceremonies this weekend, ahead of China’s National Day on Oct. 1.

The Chinese Patriotic Catholic Association, an organization associated with the Chinese government, and the Bishops’ Conference of the Catholic Church in China issued a statement on Sept. 10 ordering state-approved Catholic churches to hold events in which parishioners sing China’s national anthem, pray for the nation, and raise the Chinese flag. The statement claims that Chinese Christians should take pride in the Communist Party’s leadership over the past 70 years and should hold these events to celebrate it.

The notice specifies that each event should take place before morning Mass on Sunday, Sept. 22, and the order applies to the official Catholic churches in every region of the country. The Administrative Commission of the Chinese Catholic Church and the Chinese Patriotic Catholic Association in each locality are to organize these events in each diocese and parish.

Nationalistic insertions into official churches in China, such as the singing of patriotic songs during worship services or the raising of the national flag, are becoming increasingly commonplace as the Chinese Communist Party attempts to “Sinicize” churches, or forces them to conform to the government’s agenda and show devotion to the state. Many Christians have met this enforced display of nationalism with animosity, some even arguing that it violates Christian beliefs.

“It is outrageous,” says Mr. Zhou, an attendee of a non-government church in Hangzhou. “May churches in Hangzhou have been required to raise the national flag and sing the national anthem for a long while. Now, China is back to an absurd era, and some regions are even worse than the Cultural Revolution era.”

One Christian from China’s Fujian province said that his church has even held patriotic song singing competitions and exhibitions of calligraphy, paintings, and photos to celebrate the National Day. He said, “Now, people are even forced to love the country. Churches across the country are forced to participate in singing patriotic songs, which is very ridiculous, because patriotic songs basically are linked with the chaotic era of the Cultural Revolution.”