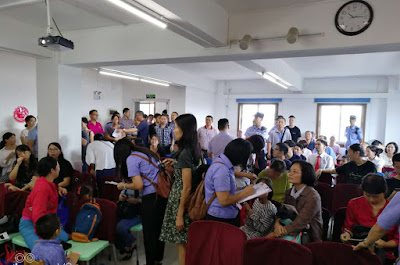 (Luohe, Henan—Sept. 7, 2018) More than 50 officials broke into Meisheng Church in Luohe, Henan, on Sunday, beating Christians and confiscating most of the church’s property.

Uniformed and plainclothes police, as well as agents from the local religious affairs and cultural bureaus invaded the service as the pastor, Chen Qi, was reading the Bible.

“They shouted as they came in, ‘Don’t take pictures. Put your cell phones in your pockets,’” one Christian said. “Then they grabbed the pastor’s microphone and forcibly stopped the worship.”

A man surnamed Li, the director of Luohe’s Yuanhui District Religious Affairs Bureau, walked to the podium and announced that the fellowship was “illegitimate.” After reading a document about the church’s supposed violation, he asked Chen to sign it, but Chen refused and was taken away. An official said to him, “The document will be effective no matter if you sign it or not.”

During the ordeal, a woman stood in the hallway and photographed the situation. Police pulled her hair and slapped her face as they pushed her up against the wall. Once they were finished, they took her into custody.

Similarly, another woman was kicked by a handful of policemen for her attempt to take pictures. She fell to the ground, and her cell phone was confiscated. When her fiancé confronted one of the officers, saying “How can you bully a girl?” he was punched and accused of assaulting the police.

The authorities did not permit those gathered for the service to leave until they had seen their ID cards and collected other personal information. Then, they took desks, stools, the podium, computers, televisions, pianos, projectors, guitars, fans, water dispensers, water bottles, instant cookers, drums, and some trivial items, according to one of the church members. They also removed a cross and cut the electrical wires. Only two air conditioning units remained, since the officials had difficulty taking them down.

On the same day, authorities in Xinyang, Henan, entered a local church without showing any papers, drove out the Christians, and sealed the door using electric welding. Some of the congregants attempted to film evidence, but police took their phones. Later on, the church rented a storage unit to hold their services in.

In the same area, officials closed off the road leading to a church, not permitting its attendees to enter. The Christians decided to sing hymns on the street instead, with one minister saying, “If we lose our church, we will go out onto the streets; we will not retreat home. If we are also arrested for proclaiming the Gospel in the streets, it is the mission and responsibility of those Christians to proclaim the Gospel in every prison!”

Similar disturbances occurred in other areas of Henan, including Hua County, where Christians gathered in front of Baidaokou Church to prevent authorities from breaking in. After a short confrontation, the authorities forced their way into the church and took chairs, desks, and a variety of other items. As they resisted, some of the Christians were injured and fell to the ground.

After the authorities left, however, some of the congregants stayed and sang worship songs.

ChinaAid exposes abuses, such as those suffered by Christians in Henan, in order to vocally call on the Chinese government to cease its persecution of religious adherents and uphold human rights, religious freedom, and rule of law.