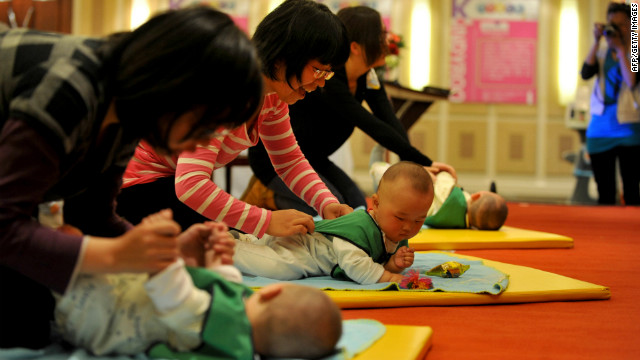 Beijing (CNN) — Nationwide outrage continued to grow Thursday in China over a late-term abortion forced upon a woman by local family planning officials, even as authorities pledged to punish those responsible.

Feng Jianmei, 22, was illegally detained on May 30 in rural Shaanxi Province and coerced to undergo the procedure three days later in the seventh month of pregnancy, her husband said.

“I’m angry and want justice,” Deng Jiyuan told CNN over the phone. “They forced her to abort our seven-month-old child — do they deserve to be called Communist Party officials who served the people?”

Deng, a 29-year-old farmer, said he was trying to secure a birth permit up to the last minute but could not afford to pay the fine of 40,000 yuan ($6,300) demanded by the officials. He added that his wife remained traumatized in hospital.

The couple married in 2006 and Feng gave birth to a girl in 2007, local officials said in a statement. Under China’s strict family planning law, which limits most married couples to only one child, Feng and Deng are ineligible to have a second child.

Graphic photos taken after the abortion showing a bloody baby lying next to Feng in a hospital bed have been circulating online and shocked Chinese netizens, prompting rare domestic media coverage and public debate on one of the country’s most controversial policies.

After initially insisting the operation was voluntary, local officials acknowledged Thursday that the forced abortion was illegal.

“Such action has seriously violated relevant policies and regulations set by the state and provincial family planning authorities, harmed the image of family planning work and caused extremely negative social impact,” said a statement released by the Shaanxi Population and Family Planning Commission.

“We have demanded the local government to investigate the case and punish those who are found responsible in accordance with law.”

Deng, the husband, told CNN that no officials above the county level had visited the family. He said village leaders who had shown up asked the family “not to hype the incident.”

On Sina Weibo, China’s equivalent of Twitter, the case was among the top trending topics Thursday afternoon, attracting almost a million comments.

Most users appear to side with the couple and condemn the officials. “Bring the murderers to justice” was a commonly posted demand.

Deng himself has opened a Weibo account, posting developments and venting frustrations. His profile picture is one of the post-abortion photos of his wife, with the baby’s image blurred, that have jolted the nation.

China’s “one child” policy was recently thrown into the international spotlight when prominent human rights activist Chen Guangcheng escaped his house arrest and moved to New York. Chen’s supporters maintain his long-time legal advocacy for victims of forced abortions and sterilizations had led to his persecution.

Since the government introduced the policy in the late 1970s to curb population growth in the world’s most populous nation, millions of women have been forced to end their “illegal pregnancies.” The number of “family planning abortions” peaked in 1983 with 14.37 million operations performed that year, according to the Health Ministry.

“No legitimate government would commit or tolerate such an act,” said Reggie Littlejohn, president of Women’s Rights Without Frontiers, a California-based group that aims to stop forced abortions in China.

“We call on the United States government and leaders of the free world to strongly condemn forced abortion and all coercive family planning in China.”