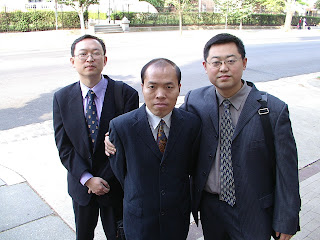 (West Lafayette, Indiana—Feb. 28, 2019) Attendees of a conference on Christianity and social activism in China were “shocked” to hear updated news of persecution of Early Rain Covenant Church and decided to pen an appeal on behalf of the church’s imprisoned Christians on Tuesday.
The appeal, which is signed by ChinaAid’s Founder and President Bob Fu, details the oppression the church has suffered in the past few months and urges Chinese authorities to immediately cease the abuse.
A translated version can be read in full below.
____

We, along with churches worldwide, have been vehemently praying for Pastor Wang Yi of Early Rain Covenant Church, his wife, and the other church co-workers [Editor’s note: Chinese Christians often refer to each other as “co-workers”], since they were arrested by Chinese Communist Party authorities on Dec. 9, 2019 [Editor’s note: This event actually took place on Dec. 9, 2018], and the church was illegally shut down. May the Lord be present with them during their affliction, comfort them, and grant them stamina to win the battle. At the same time, we pray that our Lord will shine upon the authorities so that they will stop doing evil and will not indulge in sin and deep darkness. Nevertheless, it is not going as we wish. Authorities have been obstructing lawyers from meeting with the imprisoned co-workers during the past three months, with the excuse of being that they are “under investigation.” This has caused our misgivings to not be able to help but steadily increase: Could it be that the imprisoned Pastor Wang Yi and other fellow workers could be suffering shocking torture to extort a confession? Furthermore, the authorities have even gone as far as to continuously not let women, children, and seniors participating in Early Rain Covenant Church’s worship services held at home slip by. On Feb. 25, 2019, we were shocked to hear from Early Rain Covenant Church’s Prayer Newsletter #28 that:

“On Feb. 24, a Sabbath day ordained by God, Christians suffering in the “12.9” [Editor’s note: This refers to the date more than 100 Christians from Early Rain Covenant Church were taken into custody, Dec. 9, 2018] oppression joyfully came to worship God as usual. However, multiple homes hosting the gatherings were besieged by knocks on the door or entered by police, and, after the services, attendees at two worship venues were taken to a bus that was waiting there and was used by the police, and kids, seniors, and pregnant women were all taken away by the officers. Their cell phones were confiscated, and they were not allowed to use them while in custody.

Brother A Xin, a translator, wrote incredibly quickly once he learned children, seniors, and pregnant women were arrested and Pastor Wang Yi’s 74-year-old mother was humiliated and beaten by police. In the evening, he was seized at home by approximately 10 police officers.

Up until 8:00 p.m. last night, 44 Christians were arrested in the massive 2.24  arrest, including 11 kids. They were held at a police station in Chengdu, and the youngest one is just over two months old. Tang Chunliang and other brothers and sisters were beaten violently and slapped on the face by a plainclothes police officer at the police station. All of them, including the children, had no access to food. Some of them were not released until 2:00 a.m. The sleepy children slept on the ice-cold desks and floor.”

Because of this, we urgently call on churches around the globe to pray and speak up for the persecuted brothers and sisters of Early Rain Covenant Church. We call on all related international humanitarian organizations and institutes to pay close attention and speak up. Furthermore, we pray to the Lord to intervene and stop the government’s evil and especially protect the imprisoned brothers and sisters’ bodies, so that their bodies, which are in the Lord, are physically healthy, they have peace in their hearts, and they can maintain their faith and loyalty to God.

In the meantime, we urge the Chinese Communist Party’s government to:

3. Punish those who abuse public power and violate the law while enforcing the law, according to the law;

4. Ensure victims obtain reasonable compensation, according to the law.