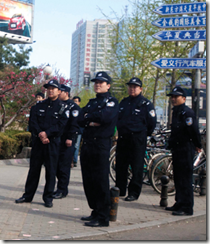 World Managzine
China | Christians in one of China’s largest unregistered churches vow to continue Sunday worship despite intimidation from authorities and growing persecution nationwide | Jamie Dean
Associated Press/Photo by Ng Han Guan
The scene for the last indoor worship service in April of Shouwang Church in Beijing was ominous: Nearly 300 church members wept and prayed for freedom to worship in their rented room at the Old Story Restaurant, while framed photos of Chinese Communist Party officials lined the walls.

The photos were a stark reminder of the church’s plight. Leaders of the 1,000-member congregation—which holds three services on Sundays—say party officials pressured the restaurant’s owner to evict the group, leading the Christians to a dangerous decision: The unregistered church would openly worship outdoors. In a letter to the congregation, church leaders explained: “Sunday worship is the most basic necessity for Christians in their life of faith.”
A week later, an outdoor Sunday gathering on April 10 ended before it began: Police blocked the designated meeting area and detained more than 160 Christians armed with Bibles and hymn sheets. Authorities interrogated the Christians at a nearby elementary school, eventually releasing them, but at least two church leaders remained under house arrest, and many church members said police were monitoring their movements.
The next Sunday a similar scene unfolded: Authorities detained nearly 50 members of the Shouwang Church attempting to worship outdoors. (Police later released most of the church members, but a few remained in custody.) The Texas-based ChinaAid reported that all of the church’s leadership remained under house arrest, and that some church members had suddenly lost jobs and faced eviction from their homes. The group suspects government pressure on employers and landlords.
The crackdown was swift, but not surprising. Human-rights groups say government persecution against Chinese Christians has been intensifying for months and has grown worse with a new development: revolution in the Middle East.
After anonymous online calls for a “Jasmine Revolution” to protest the Chinese government, authorities have rounded up as many as 100 human-rights lawyers, activists, and high-­profile dissidents since February. The U.S. State Department called on Chinese authorities to stop the “extralegal” detentions.
Churches caught in the crossfire say their goals aren’t political. But the leaders of the Shouwang Church also say they aren’t backing down. They vow to continue meeting outdoors—even if it means detentions or arrest—until officials allow reasonable access to an indoor meeting space. And they’ve gone a step further: They say Chinese authorities should let them worship freely, even if their church isn’t registered with the government.
That’s an extraordinary pronouncement. Bob Fu, director of ChinaAid, says he can’t think of another example of Chinese Christians openly challenging government authorities. “It’s definitely bold,” he said.
Chinese authorities formally require churches to register with the government, but many congregations refuse to submit to the oversight of a government that persecutes Christians. The unregistered “house church” movement includes groups that meet in homes, office buildings, and other rented spaces and has exploded in numbers over the last two decades.
Authorities have allowed house churches to meet, as long as the groups don’t pose a perceived threat. Even the thousand members of Shouwang Church in Beijing have managed to meet without government registration. (Most house churches are much smaller.) Fu believes authorities have been hesitant to completely shut down the high-profile congregation—which includes university professors, attorneys, and other respected intellectuals.
Instead, authorities began making it hard to continue, interfering with their ability to rent meeting spaces—the church met outdoors in the snow in November 2009—and blocking access to a building the church purchased by pressuring the seller to withhold the keys.
Behind the scenes, Fu—who has regular contact with church leaders—says authorities have tried to convince the church to register with the government, even offering the pastor a government position in exchange. Fu says it’s a common government strategy: Convincing churches to register with the state would allow the government to maintain control and deny charges of oppression. Most house churches aren’t acquiescing.
Shouwang Church leaders have refused to join the official government church, and in an open letter to their congregation, the church leaders said the department of religious affairs had “overstepped its jurisdiction” by interfering with their worship. The pastors called on the government to allow the church to meet indoors, saying it would “set a healthy beginning for the future relationship between church and state.”
For now, such a bold declaration may be the beginning of more trouble. Christians in at least six Chinese provinces have reported government abuse in the last few weeks. Wang Zhanhu, a pastor in Shaanxi Province, said police beat him with an electric baton while he was preaching to a crowd in April, leaving him severely injured and hospitalized. Other churches report arbitrary raids and detentions. Still, a group of 14 large house churches in Beijing—all members of the Beijing Ministerial Prayer Fellowship—expressed solidarity with the Shouwang Church and pledged to hold weekly prayer vigils. ChinaAid urged Christians around the world to pray for Shouwang, and a U.S. State Department spokesman said the United States urges Chinese officials to release detained church members and to “respect the rights of its citizens, including freedom of religion and assembly.”
The leaders of Shouwang Church know they could face more dangers. But the pastors told church members: “As the church of Jesus Christ, we should not change our mode of Sunday worship just because someone or some entity decides that we may or may not use a particular meeting place.” And the leaders encouraged detained members to respond with courage and meekness: “Do not resist, let them take us away, just like a lamb to the slaughter. In our hearts, we know we gather for worship—and for the sake of worship, we will pay the price.”