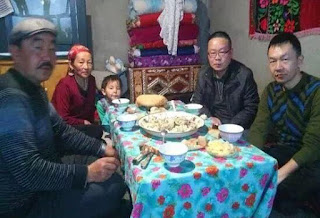 (Tacheng, Xinjiang—April 28, 2018) Authorities in China’s far western Xinjiang region have completely isolated an entire county, with armed police restricting travel in and out in order to stop news of the ongoing crackdown from getting out.

In an escalation of an ongoing crackdown in Xinjiang, a large desert region on China’s western border, police have restricted all travel to and from Emin County in the Tacheng Prefecture. Foreigners are completely forbidden from entering, even if visiting family. Within the county, a widespread campaign of persecution against Muslim-background minority citizens has taken a darker turn, where thousands of minority residents are detained in “political training centers.”

“Political training centers” is the Communist Party’s official name for a much darker reality, a widespread network of detention camps across Xinjiang, where citizens of Muslim heritage are detained for months without trial, allowed no contact with their families, and subjected to intense “cultural re-education” through propaganda and torture.

These centers exist all across the region, now overcrowded to the point that detainees are being shipped to other provinces to make room. Some remote villages are completely empty now, with every family taken away.

Two ethnic minority groups in particular, the Uyghurs and Kazakhs, have been most severely affected by the arbitrary detentions, as both groups are historically Muslim. There are more than 70,000 Kazakhs living in Emin, and as of April 20th, more than 6,000 have been locked up in the training centers.

The government claims that it is undertaking these measures in order to prevent extremism and terrorism. However, the vast majority of the arrested have no terrorist connections and are living peacefully within the region. Recently, the government has been ordering meat sellers to combine pork, which Muslims are forbidden from eating, with halal lamb meat. If anyone questions whether or not the meat has pork in it, they will be arrested.

A Kazakh named Erlan said that the human rights abuses are the reason Emin has been sealed off. “It’s normal for the government to send children off to orphanages after arresting their parents. In order to conceal the truth, the police have blocked off Emin County. No foreigners are allowed to enter the county, even those who travel to visit their family. Foreigners are assigned to live in special hospitals in Tacheng Prefecture. The government tortures the Kazakhs and has blocked all information, so people from the outside won’t know what’s going on.”

Another Kazakh, named Selik, just immigrated to Kazakhstan from Emin County. “[Back in Emin], the government arrested every single person who had been to Kazakhstan, even those who had only traveled there once. It’s forbidden for two Muslims to greet each other. The residents don’t dare say anything more than ‘hello.’ The police clearly stated that it is strictly prohibited to conduct traditional Kazakh burials and no one except the immediate family are allowed to mourn for the dead. The government even installed cameras in the cemeteries, arresting all people who visit to recite traditional prayers.”

Selik also spoke of raids on Kazakh households, where all objects with traditional embroidery or Kazakh designs were confiscated. Another strategy in suppressing Kazakh culture includes the government assigning members of the Han Chinese majority to live with ethnic minorities like the Kazakhs and Uyghurs.

“If a person asks if the meat [in a dish] is pork, he’ll be arrested and harshly sentenced,” Selik said. “The government also encourages interethnic marriages between Han people and Kazakhs, arresting any family members who disagree.”

In late March, a 40-year-old Han man used this justification to coerce a 16-year-old Kazakh girl to marry him, threatening to have her family taken to a political training center if they refused. Feeling trapped, the girl’s uncle killed the man, and authorities arrested the entire family for the murder.

“It’s common for entire families to be detained,” Ayken, a local Kazakh said to a reporter. “The police break their own laws, arresting people without showing any kind of legal documents to their families. The family members left behind never receive any report about a verdict. The police have arrested more than 6,000 people in the county. Even these official statistics are unreliable; the actual number of people detained is even larger.”

The ages of these detainees varies widely, from children as young as 10 to elders in their seventies and eighties. Family members are not allowed to visit them in the centers, and if any attempt to argue with the police or find out more information, they are also arrested.

Ayken also said that Kazakhs are warned by police that no religious activities are allowed and that the government treats those who store Islamic prayers as terrorists.

“Xinjiang has become a living hell, teeming with innocent blood,” Ayken said. “Both Kazakhs and Uyghur people are arrested. Their family members do not even know if they are still alive. It is unknown what kind of tortures and interrogations these missing people have gone through. The reality is even harsher than I described. I hope the government of Kazakhstan and the United Nations Human Rights Council can intervene and rescue these innocent civilians.”

ChinaAid reports on human rights abuses, such as the ongoing persecution of Muslim minority groups in Xinjiang, in order to expose abuses and promote religious freedom and rule of law in China.