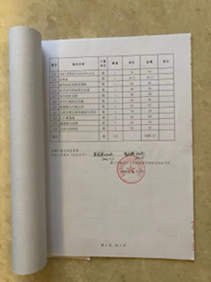 “This burden is too heavy to bear,” Lawyer Yang said.

On April 24, lawyer Yang presented a written request to the Jimei District of Xiamen City comprehensive law enforcement team of the cultural market for a hearing on the administrative penalty. In response, the Jimei District Culture Bureau informed Lawyer Yang in writing of the hearing’s scheduled date, May 13.

On May 13, the front screen projection for the large hearing venue of the Cultural Bureau of Jimei District read: “Yang Hui’s engagement in Publication Distribution Without Permission Penalty Hearing.” The official investigators included the following three individuals:

Court officials called the hearing to order at 9 am. The chairperson announced the guidelines for the venue—no unauthorized audio and video recording, etc.

Official investigators initially started the statement regarding Lawyer Yang, with Wu Yuanping carefully reading the manuscript. Fearful of making mistakes, he presented a total of 14 items as evidential material. Lawyer Yang suggested that the court consider cross-examinations first, but the chairperson insisted on the opposite protocol, initially making statements. While Lawyer Yang made statements, both the record keeper and the chairperson continually interrupted him.
Lawyer Yang posted on the Internet:

My rights still exist. The declaration of human rights, the Constitution, and the Civil Law confirmand protect them. Please stop infringing on my rights.

At times, during the lengthy, heated debate that transpired between the two sides, representatives of both spoke without the chairperson’s consent. Nevertheless, while only mumbling a few words to the officials handling the case, the chairperson routinely admonished Lawyer Zou and threatened to expel her from the hearing.

During this period, officials suspended the hearing for five minutes to allow the case handlers to photocopy materials. After the case restarted, investigators failed to give all evidential copies to Lawyer Yang and his representing lawyers, making them unable to verify the original material. The investigators also insisted that the evidence should not be shown to Lawyer Yang nor would the court hold a cross-examination.

With no other alternative to enable the cross-examination process, Lawyer Yang asked the opposing party to provide an evidence list. During this part of the hearing, the deputy director of the Culture Bureau of Jimei District [led team that illegally entered Lawyer Yang’s private property] unexpectedly entered the hearing and directly approached the chairperson. After whispering to this person, he sat down and reviewed legal documents.

Throughout the cross-examination, although Lawyer Zou repeatedly asked investigators to present evidence of administrative case filing, they not only failed to do so, they did not offer any explanations for their contempt. Lawyer Zou repeatedly stressed that the absence of a filed case would invalidate the investigation and the penalty. The case handling party also refused to allow Lawyer Yang’s legal counsel to access or photocopy evidence.

When Lawyer Yang asked to photograph the hearing’s written record, the court officials rejected his request.

Lawyer Yang, a Christian in the Xiamen family church, involved in Christian rights protection cases, once served as an attorney in the 129 case of Early Rain Covenant Church. He also defended Pastor Cao Sanqiang. In the winter of 2020, Lawyer Yang participated in the defense of the well-known “12 Hong Kongers’ case.”

CCP officials did not fabricate Lawyer Yang’s judicial department penalty to revoke or cancel his attorney’s license. Instead, and the opposite of the Party’s intent, the formulated charge in the name of selling books on the Internet, exposes one more venue the CCP uses to develop and fuel their devious devices designed to persecute Christians.

###
For we do not want you to be ignorant, brethren,
of our trouble which came to us in Asia:
that we were burdened beyond measure,
above strength,
so that we despaired even of life.
Yes, we had the sentence of death in ourselves,
that we should not trust in ourselves
but in God who raises the dead…
~ 2 Corinthians 1:8 (NKJV)
China Aid exposes abuses in order to stand in solidarity with the persecuted and promote religious freedom, human rights, and rule of law. If you wish to partner with us in helping those persecuted by the Chinese government, please click the button below to make a charitable donation.