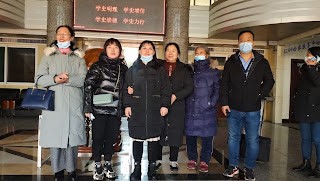 (Fenyang, Shanxi Province—December
31, 2021) On December 28, Fenyang court held a trial for five Christians of
Taiyuan Zion Reformed Church, all of them tried for the charge of “illegally
crossing the national border”. Officials allowed lawyers and family members to
attend the court session, but the court did not immediately announce its
verdict.

The defendants were Zhang Ligong,
Wang Runyun, Wang Shiqiang, Zhang Yaowen, and Song Shoushan. All five testified
their faith during the trial. God was with them the whole time. They even shared
the gospel with the judge. Everybody in the court was able to learn about God.

A very
experienced lawyer told ChinaAid:” According to the law, defendants of this
kind of case usually receive no more than 1 year of sentence. These 5
Christians have been detained for more than 5 months, so the court is in a
hurry to hold a trial.”

These 5
co-workers of Taiyuan Zion Reformed Church traveled to Kuala Lumpur
(Malaysia) to attend the “Gospel and Culture Conference 2020” organized by
Stephen Tong Tjong Eng in Kuala Lumpur, Malaysia. In the morning of July 28,
2021, they were criminally detained by local police officers under the charge
of “illegally crossing the national border”. Later they were formally arrested.

Family members of the defendants
told ChinaAid that officials have asked them to join the government-sanctioned Three-Self Church several times, which were all denied. The
so-called “illegally crossing the national border” charge is a fabricated
charge to persecute the house church. This case is related to the “Measures on the
Management of Religious Professionals” published by the National Religious
Affairs Bureau in February. The law will take effect on May 1, 2022. The
following articles enable the officials to charge Christians for attending
evangelical conferences in foreign countries:

On July
13, 2021, police officers raided brother Zhang Ligong’s home in Fenyang and
administratively detained him. On July 28, the scheduled day for his release, Brother Wang Runyun and Zhang Yaowen traveled to the detention center to pick
him up. Police officers, however, criminally detained them under the fabricated
charge of “illegally crossing the national border.” Police officers then
arrested brother Wang Shiqiang and brother Song Shoushan. Although each
Christian had obtained their passports and visa legally to attend pastor Tong’s
conference in Malaysia the year before, officials charged them with the
fabricated indictment of “illegally crossing the national border.”

On November 21, 2021, Lüliang county
police officers arrested Minister
An Yankui and co-worker Zhang
Chenghao after the Sunday service. Their family received a detention notice 2
days later. They were also charged with “illegally crossing the national border.” The notice stated:

Per the
Criminal Procedure Law of the People’s Republic of China Article 82, on
November 22, 2021, our bureau criminally detained An Yankui who was suspected
of illegally crossing the national border, and he is detained at Fangshan
County Detention Center at present.

Brother
Zhao Weikai is Minister An Yankui’s co-worker and classmate. Brother Zhao and his
wife sister Li homeschool their children. Consequently, officials from the
Religious Affairs Bureau, Education Commission, and National Security Agency repeatedly
“invited” Brother Zhao to “talk” with them. Although these Chinese Communist
Party (CCP) members threatened to arrest him, trying to force Brother Zhao to
send his children to public school, he refused to compromise his belief and
continued to provide a Christian education to his children in his home.

On May
17, 2021, police officers summoned
brother Zhao to their station in the name of “proselytism,” and raided his
home. Zhao’s charge basically means that he proselytized his children. He
was administratively detained for 15 days. Police officers found documentaries
about June 4, 1989 Tiananmen square massacre and Xinjiang riot on his hard
drives, which became new evidence against him.

During
the morning of July
7, police again summoned Brother Zhao to their station. Authorities
notified his family that they had criminally detained Brother Zho and held him
in Fangshan County Detention Center under the charge of “illegal holding
of materials promoting terrorism and extremism.” Authorities soon turned their
sights to Minister An.

An Yankui
is deeply influenced by Pastor Wang Yi. In 2018, Pastor Wang Yi initiated the
joint-signature campaign “A
Joint Statement by Pastors: A Declaration for the Sake of the Christian Faith.”
Minister An is one of the first Christian leaders to sign this proclamation. CCP
authorities have also repeatedly raided Zion Reformed Church, as well as
summoned and detained Minister An several times.