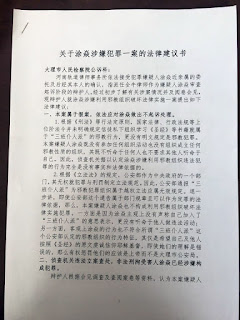 The procuratorate in Dali, Hunan transferred the case of Tu Yan, who was taken into police custody on Oct. 22 on a falsified charge of “using cult activities to undermine law enforcement,” back to the public security bureau with orders to investigate the case further.

After perusing the procuratorate’s 12 files on Tu, which consist of 2,400 pages accusing her of participating in the “Three Classes of Servants” cult, her lawyer, Ren Quanniu, penned a proposal to the public prosecutor’s office, asking that she not be prosecuted. He claimed that China’s criminal law did not identify the cult Tu was accused of participating in as illegal. As a result, he argued that they were trying to frame Tu and had no reason to imprison her.

Additionally, Tu said she is a Christian and has never participated in the cult.

Tu was seized along with four other Christians. Authorities have released three of these, but the last, Su Min, is still detained.

ChinaAid reports abuses such as those experienced by Tu in order to walk in solidarity with persecuted Christians and promote religious freedom, human rights, and rule of law.