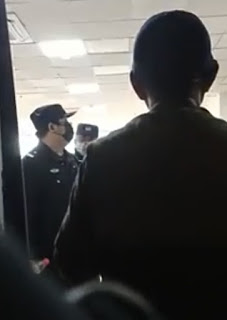 Court to hold hearing for Chongqing Mount of Olive Church

(Chongqing, Sichuan Province—April 15, 2021) On March 24, local police officers, accompanied by authorities from the Bureau of Ethnic and Religious Affairs jointly raided Chongqing Mount of Olive Church. Several dozen staff from the ethnic and religious affairs and the local police department also drove two trucks to the church. There, they removed possessions from inside the building. Officials confiscated tables, chairs, a projector, and one cross, plus expropriated a few thousand books from the church library. During the process, authorities refused to show church members a warrant.

On Thursday, April 15, Chongqing Mount of Olive Church representatives plan to attend the hearing which the CCP’s religion department organized.
For the past several years, Chongqing Municipal government authorities have regularly targeted and heavily suppressed Chongqing Mount of Olive Church. On March 21, representatives from Chongqing City Yuzhong District Bureau of Ethnic and Religious Affairs joined approximately 30 people from the public security department, the state security department, the community, and the sub-district law enforcement. Without presenting any warrant, these Chinese Communist Party (CCP) officials raided the church’s worship service, dispelled congregants, and installed seals on the church’s door. That day, CCP authorities simultaneously escorted the pastor and multiple coworkers and congregants from the church.

A hearing purposes to keep information transparent. Hearings, which originated in the UK and US, involve a system incorporating judicial trials into administration and legislature. In a hearing, also known as a mock judicial trial, two parties, holding opposing views, debate.

CCP officials notified representatives of Mount of Olive Church, however, that only two people could attend the hearing. After church coworkers debated this concern with authorities, they agreed to allow four people to be present. Church coworkers continued to request that the government increase the quorum.

The result of the hearing will impact how the court later handles the case.

Yu Bing, ChinaAid Special Reporter
###
The first one to plead his cause seems right,
Until his neighbor comes and examines him.
~ Proverbs 18:17 (NKJV)
China Aid exposes abuses in order to stand in solidarity with the persecuted and promote religious freedom, human rights, and rule of law. If you wish to partner with us in helping those persecuted by the Chinese government, please click the button below to make a charitable donation.