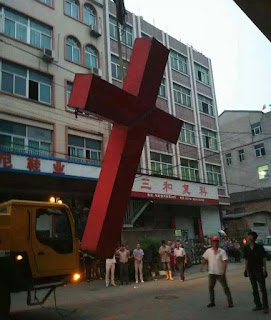 In addition to the hundreds of other Zhejiang churches persecuted since the beginning of a province-wide “Three Rectifications and One Demolition” persecution campaign that began in early 2014, at least 22 churches in Zhejiang province received demolition notices or had their crosses forcibly demolished from June 24-July 20, which prompted the Catholic Patriotic Association and the Chinese Catholic Bishops Conference to release the letter on July 5, calling for an end to the oppression.

The letter, which can be read in its entirety below, called the actions taken by the local and provincial governments against churches “evil.” China Aid learned later that the Zhejiang Provincial Government was angered by the statement and demanded its withdrawal. When the Catholic Patriotic Association and the Chinese Catholic Bishops Conference refused to withdraw the statement, the Zhejiang Ethnic and Religious Affairs Bureau revoked the two committees’ official seals for “failing to follow procedure.”

One Christian said the religious affairs bureau revoked the seals out of fear. “The seals have really been taken back… in order to prevent the two committees from issuing another statement. The religious affairs bureau is afraid that all the Christians will follow the statements. Then the government can’t do whatever they want, such as tearing down churches and demolishing crosses,” he said.

Since China Aid’s last report on the Zhejiang persecution campaign, which featured the demolition of two crosses in Rui’an, a sub-city within Wenzhou, and one cross in Hangzhou, reports of more cross demolitions have surfaced.

China Aid learned that authorities in the Hengfeng subdistrict of Wenling removed the 19-year-old Xiayanglin Church’s cross in the early morning of June 24. The next day, five crosses in the cities of Wenling and Taizhou were demolished, including Jiming Church, Xiaocun Church and Tantou Church, all of Wenling.

Moreover, the Wenling Municipal Three-Self Patriotic Movement (TSPM) held a meeting on June 25 and declared that the crosses topping all the city’s churches would be removed by the end of July — the number of churches affected is 118, according to Pastor Zhang Mingxuan, president of the Chinese House Church Alliance. Following the meeting, the director of the Wenling Municipal Religious Affairs Bureau reportedly reminded church representatives that he “hopes each church will remove its cross on its own.”

One church official told China Aid that the government is determined to demolish the crosses. “They just said that it’s the provincial government’s policy. If you do not remove your cross, they will demolish the church building because ‘each church has some areas that were not legally built.’ They said if you demolish your cross, your illegal building will not be demolished.”

Also, a Catholic church and eight other churches in Hangzhou received official notifications on June 25, stating that they would be demolished within a week, Pastor Zhang reported.

Meanwhile in Wenzhou, authorities demolished the cross on Shipan Church in the city’s Cangnan County.

A Shipan Church member told China Aid that the church’s cross has been scheduled for demolition since last year. “We were told that our cross would be demolished last year after the government previously leaked a message that it would demolish the whole church. Because our church doesn’t have sufficient documents, the government used a loophole to demolish the cross.”

Other Wenzhou Christians reported the Zhejiang’s provincial Party Committee Secretary, Xia Baolong, who directed the last year’s cross demolitions, came to Wenzhou on July 24 to attend a meeting where he was informed of the current status of the persecution campaign and to tour demolition sites.

Fu Yonggang, one of Holy Love Christian Church’s lawyers, said that the church has all the required documents. “It is illegal for the government to remove the cross using the ‘Three Rectifications and One Demolition’ persecution campaign, [which targets so-called illegal structures]. Our group of 11 lawyers accepted the case and issued a statement to the Jinhua Municipal Religious Affairs Bureau and the Jinhua Municipal United Front Work Department,” Fu said.

According to Christians in Jinhua, another party official said that the crosses “impact drivers’ ability to drive safely,” thus only crosses along the sides of the road were originally removed. Despite the party official’s reason for the demolition campaign, crosses within a certain radius of the roads were next, followed by crosses throughout the province.

Mid-July
China Aid previously reported that a group of Christian human rights lawyers banded together to defend churches in Zhejiang despite a crackdown on rights defense lawyers that began on July 9 and affected several of the group members. The lawyers, led by attorney Zhang Kai, announced the formation of the “Lawyer for Protection of the Cross” group on July 14.

The same day, at around 12:30 p.m., hundreds of Hangzhou officials removed the cross topping the Nursing Home of Holy Love, which was run by the Hangzhou Christian Association. The cross was modified to be smaller and relocated on the wall of the nursing home.

Bethel Church in Wenling was also attacked on July 14. Church member reported that hundreds of public security bureau agents came to demolish the cross and met resistance. Several church members were wounded in the conflict; one woman suffered a heart attack that left her in a coma.

One Christian said the woman who had the heart attack was thrown into the crowd by police and other church members were beaten.

Bethel Church’s cross was one of the last ones left standing in Shitang, a small town that is a subdivision of Wenling. Church members guarded the cross, preventing authorities from removing it.

Officials in Taizhou resumed church persecution on July 20 with the removal of Sanhe Church’s cross. Local Christians said approximately 100 police officers and city inspectors blocked off the church and used a crane to remove the cross.

Late July
Many area churches received cross demolition notices, including Fengwo Church, whose pastor Huang Yizi is serving a one-year sentence for “gathering a crowd to disrupt public order” after helping another church defend its cross.

On July 18, the Lucheng District Three-Self Patriotic Movement committee and the Lucheng District Christian Association of Wenzhou released an open letter, asking for prayer and stating that the cross is a symbol of God’s love and redemption. The letter also states its support of the statement released by the Zhejiang Catholic Patriotic Association and the Zhejiang Chinese Catholic Bishops Conference.

China Aid also learned in late July that 135 crosses in Pingyang County, Wenzhou are scheduled for demolition by Sept. 20.

Statement Strongly Calling for the Immediate Cessation of Cross Removals

Recently, a large number of the crosses atop cathedrals have been forcibly removed, causing clergymen and the Catholics to express public resentment. So an emergency conference call was held by the directors and deputy directors of the Zhejiang Catholic Patriotic Committee and the Zhejiang Chinese Catholic Bishops’ Conference where everyone expressed a strong demand for the immediate cessation of the malignant behavior of removing the cross. Because:

1. This evil is contrary to the rule of law emphasized by General Secretary Xi. The Party’s religious policy is to protect legitimate work, combat illegal activities, resist penetration, and fight against crime. All the churches whose crosses have been removed were approved in accordance with regulations; therefore, all are legal, not harmful, and all should be protected.

2. The evil plays against the establishment of a harmonious society. This is no small matter of ethnic and religious affairs. The cross is the expression of the Catholic faith; it is also the symbol of love. To demolish the cross means to demolish the faith of the pious and to condone hatred. In fact, the demolitions have created hatred and brought great instability to a harmonious society.

3. This evil has put the work of the two committees of the Zhejiang Catholic Church in trouble. They are bridges which link the Party government and the Catholic churches, but they are a “broken bridge” now.

In short, the two committees of the Zhejiang Catholic Church once again strongly urge the provincial government to call for the immediate cessation of the evil.