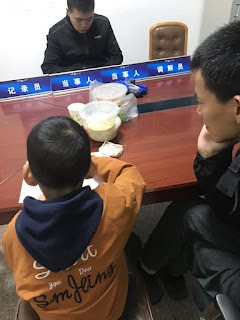 Dai Zhichao and his family arrested, locked out of their home

(Chengdu, Sichuan Province—October 19, 2021) During Early
Rain Covenant Church’s Sunday service on October 17th, police
arrested preacher Dai Zhichao and his family. They were detained in Wuhou
District’s police station for more than 10 hours. Upon their return, they found
the keyhole to their house completely filled with glue.

At around 8 AM on Sunday, Brother Dai Zhichao heard someone
knocking at his door. He checked the peephole to find several plain-clothes
officers standing outside. Instead of answering, he and his family attended the
Early Rain Covenant Church’s service online. Afterward, the family tried to
leave their neighborhood but were stopped by several plain-clothes officers. They
said Brother Dai was an anti-government dissenter.

The police took away the key of Mr. Dai’s electric bike and his
wife Mrs. Lu Lingzhi’s cell phone. According to Mrs. Lu, the officers failed to
show any paperwork proving they were law enforcement.  Brother Dai started preaching the gospel to
the police as they arrested him.

They arrived at the station at 11AM. A detective interrogated them
four hours later. During the query, he threatened the family to move out of
Chengdu like the Chinese Communist Party (CCP) threatened him in
September.

Officials released the family at 9pm after hours of questioning
and detainment. When they arrived at home, Brother Dai found glue obstructing
their keyhole. They had to spend the night at a friend’s home.

Brother Dai Zhichao wrote in his devotion journal in the evening
of October 17:

Thank you, God, for the 10 hours my family spent in the police
station. We were surrounded by evil people, and the whole process was full of
illegal misconducts, but we felt warmth in our hearts as a family. God, please
protect us as we walk the way ahead. When we sat in the narrow hallway in the
police station, we thought of Jesus, who was born in a manger, and the Son of
Man has no place to lay his head. We were grateful for God’s choice. The
road ahead appears long and narrow, but God please send us your almighty power
so we can testify the living Gospel that conquered death. Please continue to
pray for my family and ask for God’s protection for my family. Please also pray
that God gives me faith and endurance to experience His faithfulness and
presence.