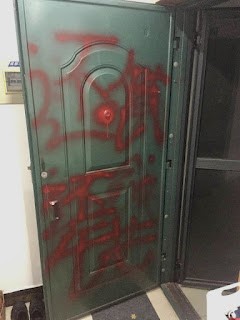 (Chengdu, Sichuan
Province—October 26, 2021）On Sunday October 24, Early Rain Covenant Church’s preacher Mr.
Dai Zhichao and his family faced harassment in their home.
A group of unknown people beat on Brother Dai’s door in the early
morning. They vandalized it with the message “Pay your debt”. The keyhole to
the house was also completely filled with glue. At 10 AM, someone cut off his
power. Dai inquired the community management office, but they lied to him over
the phone, saying his power shut off due a circuit breaker jump. The
electricity resumed shortly after their phone call. Dai and his family were
without power for seven hours.
Dai Zhichao is the leader of “Tashui,”
a small group of Early
Rain Covenant Church. Tashui endures heavy persecution from police in
Chengdu. Last
week, Dai Zhichao and his entire family were detained for over 10
hours.

After the
most recent harassment, Brother Dai reported the whole day’s situation to the
church, asking believers to pray for his family:

We were
scared. We were just able to open the door. When we watched outside through the
peephole in the morning, we noticed those people seemed to live next door.  Please pray for God’s help and peace during
the tribulation… When they vandalized our door in the morning, I suspected they
were painting ‘pay your debt’. It was actually those words when I opened the
door to look. Thank you, God. We were really nervous. Now we can better
understand the feeling of those who were bullied but unable to appeal for help.
Thankfully we have God, or else we would be really angry. Thank you for your
prayers and love. It’s back in peace for now. Please pray for God to bring us
peace and protection. When they hear us worship God during Sunday services,
they get angry and come attack us. Actually, they are not attacking us, but
attacking Christ. God, please help us better understand the sweetness of the
cross, and that the most powerful force is the gospel. May the Holy Spirit be
with us!

Other members of Early Rain have faced mounting persecution in recent months.
Officials shut off power and water to preacher Lu Xuetao’s house for 9 months
because he allowed  Jia Xuewei to live with his family. The
keyhole to Brother Zhu Hong and Brother Liang Huali’s house was also obstructed.
Officials harassed Brother Tang Chunliang and his wife, Sister Zheng Chuanjuan,
and asked them to move. Meanwhile, Sister Liu Wei has been forced to move five
times over the last two years.  Police
summoned Brother Xiao Luobiao to Hongpailou police station on October 18 on the fabricated charge of “organizing an evil cult.”

In spite of harsh persecution, Early Rain has continued to speak for the persecuted, pray for people, and encourage other house
churches to stand firm and walk the way of the cross. They ask fellow believers to pray that God helps and allows them to live in Chengdu in peace.