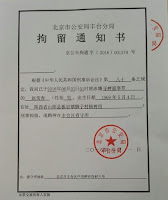 (Beijing—June 3, 2016) Beijing authorities apprehended a pro-democracy activist and Christian on June 1 during a crackdown on dissent ahead of the 27th anniversary of the Tiananmen Square Massacre.

According to a detention notice issued by the Fengtai Sub-bureau of the Beijing Municipal Public Security Bureau, officials criminally detained Zhao Changqing, a house church member and democracy advocate, on charges of “picking quarrels and stirring up trouble.” He is currently being held at the Fengtai District Detention Center.

His detention comes during a time of heightened government monitoring in the days leading up to the June 4 anniversary of the Tiananmen Square Massacre, which the Chinese government strives to obscure.

Zhao’s sister hired Li Baiguang, a prominent human rights lawyer, to represent him. Subsequently, Li filed a request to meet with his client, but the detention center rejected it.

Translations of related documents, including Zhao’s detention notice, can be found below.

China Aid exposes abuses, such as those experienced by Zhao Changqing, in order to promote human rights and rule of law in China.

According to the eightieth regulation of the Criminal Law of People’s Republic of China, our bureau has put Zhao Changqing who committed the crime of picking quarrels and provoking troubles into criminal detention on 6/1/2016, 1 p.m. at the Fengtai District Detention Center (gender male, birthday 5/4/1969, address Yangshu Group, Lion Village, Banyan town, Shanyang County, Shanxi Province).

Annotation: The address of the detention center is No.6 Shagang Village, Lugou Bridge, Fengtai District, Beijing

According to the law, client Cao Xuemei hereby hires Beijing Gongxin Law Firm’s Lawyer Li Baiguang as the defender for criminal suspect Zhao Changqing who committed the crime of picking quarrels and provoking troubles. The letter of authorization will be valid from this very day to the date when the result of the first instance comes out.

Annotation: There are three copies of this letter of authorization, to be held by the client, the law firm and the court.

Letter of Request for the Lawyer to Meet with the Detained Criminal Suspect and the Defendant
(2015) No.007

According to the thirty-sixth, the one-hundred-and-fifty-first and ninety-sixth regulations of the Criminal Law of People’s Republic of China and the thirtieth regulation of the People’s Republic of China Lawyer’s Law, please allow the lawyer Li Baiguang to visit your center to see the suspected criminal (defendant) Zhao Changqing who is charged with the crime of picking quarrels and provoking troubles. Please arrange this meeting.