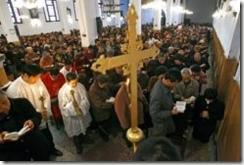 The petition — signed by the pastors of 17 top unregistered churches — was addressed to parliamentary chairman Wu Bangguo, and urges the legislature to pass a law to protect religious freedom in the officially atheist country.
It complained of an ongoing nationwide crackdown aimed at shutting down “underground” or “home” churches.
In China, about 20 million Protestants and Catholics worship in official churches, while membership of “underground” churches which refuse to bow to government controls on religion has grown to an estimated 50 million.
The action was the first time so many unregistered churches had grouped together to publicly address freedom of worship in Communist-ruled China, said the US-based rights group China Aid, which posted the petition on its website.
“For the last six decades, the rights to liberty of religious faith granted to our countrys Christians by the Constitution of the Peoples Republic of China have not been put into practice,” said the petition, dated May 10.
It urged the parliament to investigate the constitutionality of the government’s “religious management” policy, which restricts and suppresses religious freedom through “politically-charged” government-run churches.
It also accused the authorities of systematically violating a clause on religious freedom in the Universal Declaration of Human Rights, which the Beijing government has signed up to.
“Religious liberty is comprised of freedoms of assembly, association, speech, education and evangelism,” the petition said.
“As both Christians and citizens who deeply love the country, we are willing to pray continually for our countrymen and the government, and pray for a rising China that needs to shoulder more universal responsibility.”
The petition urged a probe into efforts by authorities to shut down Beijing’s Shouwang Church, the capital’s leading unregistered church with a congregation of more than 1,000, largely business people and academics.
Since 2009, Beijing authorities have repeatedly closed Shouwang’s places of worship, put church leaders under house arrest and detained hundreds of followers who have had to resort to worshipping outdoors, the petition said.
“We have observed the conflict between state and church unfolding recently in our capital Beijing and have so far seen no sign of the conflict being resolved,” the petition said.
“Similar incidents where a local church was forced to hold outdoor services due to governmental pressure on place of congregation took place in Shanghai, Guangzhou, Chengdu and Linfen.”
In response to the petition, the government said it singled out Shouwang for engaging in “illegal gatherings” and harming “social order,” and denied that religious freedoms had been curtailed.
“The Chinese government safeguards the right of Chinese citizens to religious freedom and freedom of faith in accordance with the law,” foreign ministry spokesman Jiang Yu told reporters on Thursday.
“At the same time, while enjoying their freedom, citizens must respect their legal rights and obligations and cannot harm the public interest.”
Meanwhile, China Aid said a Protestant church in central China’s Henan province was raided by police on Tuesday and a South Korean Bible instructor and his Chinese wife were taken into custody.
Another 51 church members, including two South Korean pastors, were detained overnight but released, the group said.
China Aid said a worldwide signature campaign among Christians had been launched to bring greater awareness to religious persecution in China.